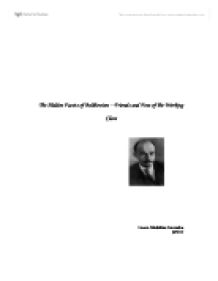 The Hidden Facets of Bolshevism - Friends and Foes of the Working Class.

The Hidden Facets of Bolshevism - Friends and Foes of the Working Class Laura-Madalina Lixandru SPE II The phenomenal impact that Bolshevism has had on the world we contemplate around us nowadays is one that makes you question yourself what it was really founded on. There are numerous voices that still whisper Lenin's name with piety, and many more that still regard Bolshevism as the only ideology that identified with the people. However, Bolshevism had many facets, many of them still left uncovered. The fact that Bolshevism strayed from the path of Marxism, as well as the development of Bolshevism to a full scale governing ideology are well known to everybody. The dark side of the road it took, however, is little known and approached with some sort of fear. My first revelations came while reading Paul Johnson's Modern History chapter on the emergence and development of the movement lead by Lenin. It made me inquire what was behind the mask, what Bolshevism really did when it came to actions. The answer was given by Martin Malia's The Soviet Tragedy. Malia's book exhaustively analyzes the Soviet "experiment" from its Marxist roots to its final implosion. Seen as an "ideocratic Partocracy", a term that indicates the dependence on ideology coupled with the dictatorship of the Party form the vehicle through which socialism operated, the author asserts that the whole of Soviet history alternated between hard and soft communism exemplified in these two primary events. The role of ideology is central to his analysis when showing that the utopian dream of universal equality could only lead to self-destruction. The Marxist-Leninist worldview progressed historically as the paradoxical pursuit of human equality through the "primitive military means of the partocracy," (492). Malia sees the idea of Soviet socialism in Lenin the Founder as "ideological illusion and raw coercion," (494). Central to his argument, then, is the military means to build communism. ...read more.

Marx had previously denounced such terms. To him there could be no such thing as a free State or a socialist State. The State was an instrument of force by which one class dictated its will to another. Socialism, on the other hand, stressed the withering away of the State and the disappearance of the class struggle. It was Lenin himself who recognized that the Russian Revolution did not establish a one-class workers' dictatorship but a two-class workers' and peasants' rule, with the working class a small island in a large ocean of peasants. Under the Bolsheviks the seizure of State power did not lead to the rule of the working class; it did not lead to world revolution and the victory of the workers in Europe and elsewhere. There could be Socialism in Russia only if the Russian working class used its power for the emancipation of the workers of the world and this it could do only in cooperation with the workers of the world, particularly in the highly developed industrial countries of the West. Such an event did not occur. Never an internationalist party, parochial Russian Bolshevism could not even begin to solve its international problems, and it soon sunk into the stupor of Stalinism. We cannot question the great achievements of Lenin. But we must recognize that he was, at most, only a European and this is far from being fit for world-wide leadership. Even as a European revolutionary force the Bolsheviks under Lenin (and Trotsky) had only failures to their credit in Poland, in Germany, in Bavaria, in Hungary, and elsewhere. Soon after the Bolsheviks took power in the Soviet Union they immediately took on a messianic role for the rest of the world. All were to imitate the Bolsheviks. In the end they destroyed every revolutionary force throughout Europe and proved of inestimable motivational value to the capitalist classes of the world. ...read more.

The people of God cooperate with atheists; the most skilful accumulators of property ally themselves with Communists; the peculiar and chosen Race touch the hand of all the scum and low castes of Europe; and all this because they wish to destroy that ungrateful Christendom which owes to them even its name, and whose tyranny they can no longer endure." (74) The alliance of Jewish finance with Bolshevism was as complete as it was when Disraeli wrote in 1852, as above quoted. "The power of the Government lies in the Central Committee of the Bolshevik Party and its composition in 1918 was nine Jews and three Russians" affirmed R. Wilton, in Les derniers jours des Romanof. The situation continued until February 1939, when changes started taking place - a large number of Jewish officials had been "liquidated" (executed), but the situation was still obscure. To sum it up, Judaism and Jews have played an important role in the development of Bolshevism. All the evidence found points to it, but all great historians haven't given it too much room in their writings. How can one not be surprised to discover a hidden facet such as the one described by M. Cohen, (Jewish as well), who wrote in "The Communist," Kharkoff, 12th April, 1919? "Without exaggeration, it may be said that the great Russian revolution was indeed accomplished by the hands of Jews--It is true that there are no Jews in the ranks of the Red Army as far as Privates are concerned, but in the committees and in the Soviet organizations, as Commissars, the Jews are gallantly leading the masses of the Russian proletariat to victory-the symbol of Jewry has become also the symbol of the Russian proletariat which can be seen in the fact of the adoption of the Red five-pointed star, which in former times was the symbol of Zionism and Jewry. ...read more.