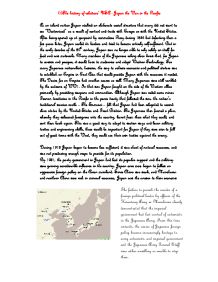 The history of relations' USA - Japan the War in the Pacific

(1)The history of relations' USA - Japan the War in the Pacific As an island nation Japan evolved an elaborate social structure that many did not want to see 'Westernised" as a result of contact and trade with Europe or with the United States. After being opened up at gunpoint by commodore Perry during 1854 but defeating them a few years later, Japan sealed its borders and tried to become entirely self-sufficient. But in the early decades of the 20th century, Japan was no longer able to rely solely on itself for food and raw materials. Many members of the Japanese ruling class knew that, for Japan to survive and prosper, it would have to modernise and adopt Western Technology. For many Japanese nationalists, however, the way to achieve economic and political stature was to establish an Empire in East Asia that would provide Japan with the resources it needed. The Desire for an Empire had another source as well. ...read more.

Japan once more began to follow an aggressive foreign policy on the Asian mainland. Since China was weak, and Manchuria and northern China were rich in mineral resources, Japan saw the answer to their economic problems in the form of a swift invasion. 20,00 troops later entered Manchuria defeating a force of 240,00 of the Chinese army, it was a great victory. The Great Depression of 1929 hit Japan hard, the effects of this were blamed upon the Japanese Government and as a result, the views of the extremists became highly shared and influential. The army became more powerful and now used intimidation and assassinations as a way of achieving their aims. The militarist-dominated Imperial Government was followed by the more moderate Hamaguchi government, which tried to curb the power of these military extremists. The extremists responded by plotting to overthrow civilian government. Prime Minister Osachi Hamaguchi was assassinated in 1930 and in March 1931, a coup involving senior military leaders was planned but later abandoned Japan's political weakness was now clear and the influence of the Military Extremists increased. ...read more.

Tojo - now Prime Minister - grew convinced that the West's goal was to encircle Japan and starve it into submission. He ended all diplomatic relations and contact. Events began to reach boiling point in September 1941, when the US Secretary of State, Cordell Hull demanded that Japan withdraw its troops from the Chinese mainland and from Indo-China. For weeks, Japanese policymakers debated what response to make. Many leaders of the Japanese Imperial Navy quailed at the prospect of going to war with the United States, but Tojo strengthened their resolve by convincing them that to agree to the Americans demands would be a humiliating diplomatic defeat, once again reducing Japan to the status of a minor nation. While carrying on negotiations with the USA, Japan sent its army into Thailand, Malaya, Burma, and the East Indies. And on November 26th, 1941, the Japanese Navy set sail for Pearl Harbour; the base in the Hawaiian Islands where most of the U.S Pacific fleet was docked. ?? ?? ?? ?? ...read more.