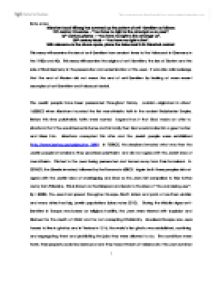 Historian Raoul Hilberg has summed up the pattern of anti-Semitism as follows: 12th century Crusades - "You have no right to live amongst us as Jews". 16th century ghettos - "You have no right to live amongst us". 20th century Nazis - "You have no right to live". With reference to the above quote, place the Holocaust in its historical context This essay will examine the rise of anti-Semitism from ancient times to the Holocaust in Germany in the 1930s and 40s. This essay will examine the origins of anti-Semitism, the rise of Zionism and the role of Nazi Germany in the persecution and extermination of the Jews. It was also acknowledge that the end of Nazism did not mean the end of anti-Semitism by looking at more recent examples of anti-Semitism and Holocaust denial. The Jewish people have been persecuted throughout history. Judaism originated in about 1600BCE when Abraham founded the first monotheistic faith in the ancient Babylonian Empire. Before this time polytheistic faiths were normal. Legend has it that God made an offer to Abraham that if he would leave his home and his family then God would make him a great nation and bless him. Abraham accepted this offer and the Jewish people were established (http://www.jewfaq.org/origins.htm 1999). In 722BCE, the Assyrians invaded what was then the Jewish people's homeland. They practised polytheism and did not agree with the Jewish idea of monotheism. This led to the Jews being persecuted and forced away from their homeland. In 301BCE, the Greeks invaded, followed by the Romans in 63BCE. Again both these peoples did not agree with the Jewish idea of worshipping one God so the Jews felt compelled to flee further away from Palestine. This is known as the Diaspora and leads to the idea of "the wandering Jew". By 1500BE, the Jews had spread throughout Europe, North Africa and parts of southern Arabia and many cities had big Jewish populations (class notes 2010). ...read more.

Other right wing nationalist groups began to respect and follow the Nazi Party. Between 1924 and 1932, the Nazi Party grew to become the strongest political party in Germany and in 1933 Hitler became Chancellor. Germany became known as The Third Reich, a country not only under the dictatorship of Hitler, but also a one party totalitarian state which controlled all aspects of German life. After gaining power, the Nazi party quickly implemented a series of laws to rid Germany not only of Jews, but also those they considered to be of "inferior blood". This included Roma Gypsies and the mentally and physically handicapped. Hitler had made his views on ridding The Third Reich of those people he saw as weakening the German people at the Nuremberg rally in 1929 saying that "...As a result of our modern sentimental humanitarianism we are trying to maintain the weak at the expense of the healthy. Degenerates are raised artificially and with difficulty. In this way we are gradually breeding the weak and killing off the strong" (Farmer, A., 2009 pp 40-41). In 1935, a series of discriminatory laws, known as the Nuremberg Laws, was introduced which deprived Jews of their rights as citizens and forbidding them from marrying or having sexual relations with Aryans (http://www.historyplace.com 1997). The Nazi takeover and subsequent implementation of these laws resulted in large number of Jews fleeing Germany, many to neighbouring European countries, from where they would later be caught when the Nazis invaded these countries during the war. Life for Jews in Germany became increasingly difficult as more laws were passed restricting their education and employment opportunities and forcing them to emigrate. Effective use of propaganda gave a negative image of the Jews. Goebbels used the stereotypical example of eastern European ghetto Jews as an image to reinforce the idea in Germans' minds that the Jews were foreigners despite most Jews being well integrated into German society at the time. ...read more.