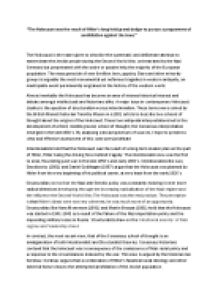 The Holocaust was the result of Hitlers long held grand design to pursue a programme of annihilation against the Jews. Discuss with reference to the sources.

﻿?The Holocaust was the result of Hitler?s long held grand design to pursue a programme of annihilation against the Jews.? The Holocaust is the name given to describe the systematic and deliberate attempt to exterminate the Jewish people during the Second World War, orchestrated by the Nazi Germans but perpetrated with the active or passive help the majority of the European population. The mass genocide of over 6million Jews, gypsies, Slavs and other minority groups is arguably the most monumental yet nefarious tragedies in western antiquity, an inextirpable event permanently engrained in the history of the western world. Almost inevitably the Holocaust has become an area of intense historical interest and debate amongst intellectuals and historians alike. A major issue in contemporary Holocaust studies is the question of structuralism versus intentionalism. These terms were coined by the British Marxist historian Timothy Mason in a 1981 article to describe two schools of thought about the origins of the Holocaust. These two antipodal interpretations led to the development of a third, middle ground, school of thought; the Consensus interpretation emerged in the late 1980?s. By analysing a broad spectrum of sources, I hope to present a clear and effective assessment of this controversial debate. Intentionalists hold that the Holocaust was the result of a long-term master plan on the part of Hitler, Hitler being the driving force behind tragedy. The intentionalist view was the first to arise, flourishing post war in the late 1950?s and early 1960?s. Intentionalists like Lucy Dawidowicz (1981) and Daniel Goldhagen (1997) argue that the Holocaust was planned by Hitler from the very beginning of his political career, at very least from the early 1920?s. Structuralists stress that the Nazi anti-Semitic policy was constantly evolving in ever more radical directions developing through the increasing radicalization of the Nazi regime and the influence the Second World War; The Holocaust was the end product. ...read more.

Hitler needed a solution to this ?Jewish Question?. Structuralists point to the fact that in the 1930s, Nazi policy aimed at trying to make life so unpleasant for German Jews that they would leave Germany. In 1939 a Central Offics for emigration was set up. Structuralists have noted that in German documents from 1939 to 1941, the term "Final Solution to the Jewish Question" was to be understood as a "territorial solution", and that the entire Jewish population was to be expelled from Germany. Structuralist historians assert that Nazis aimed to expel all of the Jews from Europe, but only after the failure of these schemes did they resort to genocide, sometimes referred to as the "crooked path" to Judeocide. OWN SOURCE 5 THE MADAGASCAR PLAN ?I hope that the concept of Jews will be completely extinguished through the possibility of a large emigration of all Jews to Africa or some other colony.?.However cruel and tragic each individual case may be, this method is still the mildest and best, if one rejects the Bolshevik method of a people out of inner conviction as un German and impossible? - May 1940, Heinrich Himmler This entirely undermines the Intentionalists argument, proving that other plans and solutions were explored before the mass genocide and that the idea of the ?final solution? was at first, a territorial one; emphasis at first was placed upon exportation rather than extermination; between 1933 and 19838 453,271 German Jews emigrated to over 27 countries. This evidence of exportation policies supports the Structuralist belief that the war was the main factor in proliferating extreme removal policies; the disruption of war seemed to initiate Nazi plans for the emigration of the Jewish community. Himmler was the leader of the SS, and a very close associate of Hitler?s, therefore this source is reliable in the respect that it demonstrates that close influential associates of Hitler advocated emigration as a genuine policy, with no mention of mass genocide. ...read more.

There is no doubt that Hitler was fiercely Anti-Semitic however, I believe that the holocaust was the result of a combination of timing and events which Hitler used opportunistically to carry out his own ideology. In Mein Kampf Hitler repeatedly states his inexorable hatred of the Jewish people, but no-where does he proclaim his intention to exterminate the Jewish people; the events that occurred between 1933 and 1941 coincide with a gradual growth in harshness and hostilities, undermining the intentionalist argument and promoting the idea of circumstantial reaction. The statement is a limited assessment of the causation and origins of the holocaust as it focuses solely on the role of Hitler and his personal ideology and deep rooted ‘plans’. The existence of background anti-Semitism in Europe, the role of propaganda, Hitler’s ideology and the competitive polycratic nature of state as well as failure of policies like emigration and the impending losses in the War are all part of a synthesised cause of the Holocaust. The consensus view uses evidence from a broad spectrum of sources, of a longer period of time rather than focusing solely upon Hitler’s early writings or the events that unfolded. The championing historians are far less open to bias and give a wider perspective on the events. The Israeli historian Otto Dov Kulka has praised Kershaw’s concept of "working towards the Führer" as the best way of understanding how the Holocaust occurred. The consensus view demonstrates both Hitler’s central role in the "Final Solution" and why there was no need for any order from Hitler for the Holocaust to occur, as the progress that led to the event was "worked out" toward the Führer by almost the entire German population. Therefore the holocaust did not just stem from Hitler’s fierce anti-Semitic ideas but from a range of other interconnected factors, all cohering in the mass genocide that was the Final Solution. Bibliography Websites http://www.martinfrost.ws http://www.historyplace.com/pointsofview/goldhagen.htm http://history.unc.edu/people/faculty/browning.html http://www.edexcel.com/ http://www.jewishagency.org/ http://www.historyplace.com/ http://www.zionism-israel.com/ http://www.southerninstitute.info/ http://www.ushmm. ...read more.