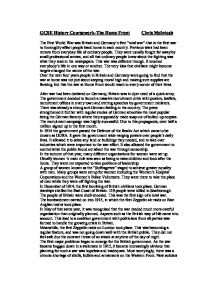 GCSE History Coursework-The Home Front Chris McIntosh The First World War was Britain and Germany's first "total war"-that is the first war to thoroughly affect people back home in each country. Previous wars had been remote from everyday life of ordinary people. They were usually fought far away by small professional armies, and all that ordinary people knew about the fighting was what they read in the newspapers. This war was different though. It touched everybody's life in one way or another. The very idea that civilians might become targets changed the nature of the war. Over the next four years people in Britain and Germany were going to find that the war at home was not just about keeping moral high and making sure supplies are flowing, but that the war at Home Front would reach to every corner of their lives. After war had been declared on Germany, Britain was in dyer need of a quick army. The government decided to launch a massive recruitment drive with posters, leaflets, recruitment offices in every town and stirring speeches by government ministers. There was already a strong anti-German feeling in the country. The press strengthened it further with regular stories of German atrocities-the most popular being the German factory where they supposedly made soap out of boiled-up corpses. ...read more.

In January 1916, the First Military Service Bill was introduced. This meant that conscription to the army was relevant for all single men in Britain aged 18 to 40. Later on in the year, the Second Military Service bill was also introduced. This extended the first bill by saying that married men also applied to conscription too. In July 1916, the Battle of the Somme took place. It led to more British soldiers being killed in this battle than any other previous battle that had taken place. Eagerly, the British public flocked to cinemas around the nation to see the government's new feature film "The Battle of the Somme", which was known as being " The greatest moving picture in the world". The government's propaganda scheme was massively successful. People were no longer na�ve as they had been in 1914 about a war like this. Even though the pictures shocked some people, the majority of people welcomed the realism of the film and dubbed it as being a brave heroic struggle. In November the Battle of the Somme was called off. With very little gain to show for half a million casualties, the British generals pulled back their men. It was a big mistake and a stupid risk. Due to the battles heavy death count, for the first time there was public criticism of the way the war was being run by the generals and government of Britain. ...read more.

By 1918 the German people were starving. German flowerbeds in Berlin were turned into allotments to provide badly needed food. Poor German production figures meant that the Western Front could not be supplied with the needed food required. Wedged between his family and a hopeless future, the German soldier's morale was shattered by the realisation that the succession of the offensives since 21st of March 1918 had in fact been in vain. Ludendoff was growing short of means to waging war-essential supplies of rubber and oil. The Great German war machine was giving way under the constant strain of three and a half years of fighting. Germany could not go on much longer. While the potato harvests were failing the morale was lowering, Germany was going into a revolution and the Kaiser was fleeing to his safe haven, the American threat of attack loomed over the German people. But once the Americans were involved, the result was almost certain to be a German defeat. The United States had vast supplies of manpower and materials, far greater than the Germans could achieve. Germany fast became exhausted; so too did Britain and France-but they could be boosted by America. And yet the Germans attacked. This weakened them. The Allies could then strike back, greatly aided by newly arrived American support. And as said by Sir David Lloyd George himself: "The conclusion is inescapable that the British and her allies were triumphant, while Germany and her allies were defeated in the field of battle". ...read more.