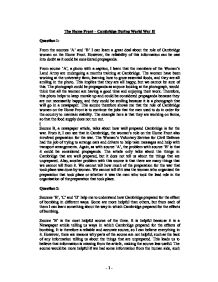 The Home Front - Cambridge During World War II Question 1: From the sources 'A' and 'B' I can learn a great deal about the role of Cambridge women on the Home Front. However, the reliability of this information can be cast into doubt as it could be considered propaganda. From source 'A', a photo with a caption, I learn that the members of the Women's Land Army are undergoing a months training at Cambridge. The women have been working at the university farm, learning how to grow essential foods, and they are all smiling in the photo. This implies that they are all happy, but we cannot be sure of this. The photograph could be propaganda as anyone looking at the photograph, would think that all the women are having a good time and enjoying their work. Therefore, this photo helps to keep morale up and could be considered propaganda because they are not necessarily happy, and they could be smiling because it is a photograph that will go in a newspaper. This source therefore shows me that the role of Cambridge women on the Home Front is to continue the jobs that the men used to do in order for the country to maintain stability. The example here is that they are working on farms, so that the food supply does not run out. Source B, a newspaper article, talks about how well prepared Cambridge is for the war. From it, I can see that in Cambridge, the woman's role on the Home Front also involved preparation for the war. The Woman's Voluntary Service for Civil Defence had the job of trying to arrange cars and drivers to help take messages and help with transport arrangements. Again, as with source 'A', the problem with source 'B' is that it could be considered propaganda. The article only talks about the things in Cambridge that are well prepared, but it does not tell us about the things that are unprepared. ...read more.

It also tells us a story about going to the toilet at the factory at night and how they had to go in threes because it was "scary". However, some of it is not useful because this is only one woman's story. We cannot tell how typical this is. For example, the toilet story is not typical for all civilians living in Cambridge at the time. I also know that one of the sentences is incorrect, as it states that Cambridge is in a hollow and it looks like woods from the air. It is very unlikely that she had ever been in an aeroplane before the end of the war therefore it is unlikely that she would know this for sure. This sentence could be seen as propaganda to keep morale up in Cambridge, because it gives the people of Cambridge a false sense of security. However, this may not be propaganda, as it is possible that it was an urban myth and someone else had told her it. Source 'I' would be more useful if there were more women's accounts, around twenty, possibly from different factories as well. Then we would be able to get a better idea of the impact of war on the civilian population of Cambridge. Source 'J' is the list of bombing statistics for Cambridge. This is very useful because they are facts. They are therefore very reliable and accurate. However, it is not as useful as it could be because it is very vague, for example, "alerts" and "incidents" are mentioned and given a statistic. Both of these words could refer to anything. It doesn't tell us whether alerts are when the siren goes off or when a plane is seen overhead. An incident could be anything from hearing a plane to actually getting bombed. Also, there are no human sides to the source so that makes it less useful too. ...read more.

Source 'M' shows us that the residents of the colleges were also playing a vital role in the war effort. From the source we can gather that the Fellows took it in turns to go on fire watching duties on the roof of the chapel. We also learn that the carol services still continued throughout the war. It keeps morale up because the residents are thinking lives were not affected completely, and some normality was retained. The sense of normality continuing and keeping morale up is evident in source 'N' as well, as chamber music continued even though the RAF took most of the old buildings. Watching for fires also keeps up morale and this is vital for the war effort because if the general public were to become demoralised then they would lose the will to overcome the problems that the Germans were causing. I also know from my own knowledge that the residents of Cambridge and the colleges had a vital part to play in the war effort. The contribution of civilians was vitally important because they had to make the munitions for the soldiers, and it was them who had to produce the food for the country to survive on. These were the two main things that the civilians had to do to contribute to the war effort, but there were many other things that were important and vital to the war effort, such as taking in and caring for evacuees and preparing for the effects of war. The residents of Cambridge and the colleges had a vital part to play in the war effort. It was crucial that there was a good contribution from civilians both throughout the country, and in Cambridge. The contributions of the civilians in Cambridge made sure that the city was well prepared and that morale was kept high. Morale is very important during a war and it provides a much needed incentive for the civilians to help with the war effort. By Greg Hill - 1 - ...read more.