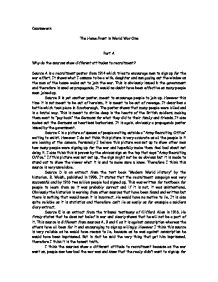 The Home Front in World War One - source related questions.

Coursework The Home Front in World War One Part A Why do the sources show different attitudes to recruitment? Source A is a recruitment poster from 1914 which tries to encourage men to sign up for the war effort. It shows what I assume to be a wife, daughter and son gazing out the window as the man of the house walks out to join the war. This is obviously issued b the government and therefore is used as propaganda. It would no doubt have been effective as many people soon joined up. Source B is yet another poster, meant to encourage people to join up. However this time it is not meant to be out of heroism, it is meant to be out of revenge. It describes a battle which took place in Scarborough. The poster shows that many people were killed and in a brutal way. This is meant to strike deep in the hearts of the British soldiers, making them want to "pay back" the Germans for what they did to their family and friends. ...read more.

Source E is an extract from the tribunal testimony of Clifford Allen in 1916. He firmly states that he does not belief in war and clearly shows that he will not be a part of it. This source is different from sources A, B and C as it is against conscription whereas the others have all been for it and encouraging to sign up willingly. However I think this source is very reliable as he would have reason to lie, because as he was against conscription he would have been imprisoned. But in fact he said the very thing that got him imprisoned, therefore I think it is the honest truth. I think the sources show a different attitude to recruitment because as the war went on, people saw how bad the war was and knew that the really didn't want to sign up for it. Therefore the government had to try a lot harder to encourage people to join through propaganda. ...read more.

Due to the shortages, people tried to grow their own food. Parks and tennis courts were turned into allotments where they could grow food. Eventually compulsory rationing was introduced. This once again, limited the amount of food people had, making it even harder to stay out of hunger. Soon factories suffered from lack of workers as the men went off to fight in the war. The government in the end had to accept that women had to do the job. This was the first time it was acknowledged that women would play a vital role in winning the war. Women were soon employed in munitions factories, textile factories and dress making factories. When conscription was introduced this forced the factories to be solely run by women. This I think shows a great difference in life before, during and after the war. The war changed many things that could not be changed back. Women gaining their independence is just one of many changes stemming from the war. ...read more.