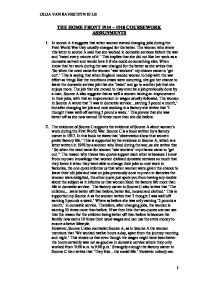 THE HOME FRONT 1914 - 1918 COURSEWORK ASSIGNMENTS 1. In source A it suggests that when women started changing jobs during the First World War they usually changed for the better. The women who wrote this letter in source A said that she worked in domestic services before the war and 'hated every minute of it.' This implies that she did not like her work as a domestic servant and would love it if she could do something else. When know that her work during the war changed for the better as she writes that 'So when the need came for women 'war workers' my chance came to 'get out'.' This is saying that when England needed women to help with the war effort as things like the munitions crises were occurring, she got her chance to leave the domestic service job that she 'hated' and go to another job that she enjoys more. The job that she moved to may even be a job previously done by a man. Source A also suggests that as well a women having an improvement in their jobs, with that an improvement in wages usually followed. The women in Source A wrote that 'I was in domestic service...earning 2 pound a month,' but after changing her job and now working in a factory she writes that 'I thought I was well off earning 5 pound a week.' This proves that she was better off as she now earned 10 times more than she did before. 2. The evidence of Source C supports the evidence of Source A about women's work during the First World War. Source C is a book written by a factory owner in 1917. In this book he states that 'observation show that women prefer factory life.' This is supported by the evidence in Source A, which is a letter written in 1976 by a women who lived during the war, as she writes that ' So when the need came for women 'war workers' my chance came to 'get out.'' ...read more.

However, I think that the purpose of this source was to show the country how badly the women were treated by male workers whilst they worked without complains for their country when they were needed most. The women writes that 'none of the men spoke to me for a long time, and would give me no help...where to find things.' This shows us that women must have had a difficult time settling in as were unable to socialise with the male employees, who at that time made up the majority of the workforce. I also know from my own knowledge that this was the way in which they treated women to show them that they disapprove of them being there and taking the jobs of other men that volunteered to fight at the front. They also played practical jokes on these women or gave them confusing instructions so that they will have more work to do, this is also written in the source. An example in the source of a practical joke (from a man's point of view) is 'My drawer was nailed up by the men, and oil was poured over everything in it through a crack.' The reason why the men might of done this is to leave the women with no equipment for their jobs and therefore give them the risk of getting into trouble by the manager for not working. The women also informed us in her account that 'Over and over again the foremen gave me the wrong or incomplete direction...to give me hours more work.' This tells us that it was not only the male employees that worked on the same ranks as the women, but also the male managers over the workers that disapproved of women working in factories and gave them a difficult time settling in, as it could have been a mistake if the foreman gave her the wrong directions once or maybe twice but he did it many times therefore it was definitely deliberate. ...read more.

From Source, C and I we can see that women were the majority of employers towards the end of the war and that most people were pleased with the effort they showed towards the war and that the war could not have been won without this effort. Source I is a 'report on 'women's work in wartime' published in 1918. It describes how most of the work previously done by men had now become a woman's job and that the country has now accepted this. 'If you chose a bus or tram, the conductress in her smart uniform has long been a familiar figure.' In source, C is a book written in 1917 by a factory owner. It states that ' personal observations show that women prefer factory life.' This agrees with the statement as I know from my own knowledge that you can only enjoy a job when you are good at it. I also know from my own knowledge that under DORA the government had power to take over large amounts of lad to grow food. They turned parks and tennis courts into vegetable plots. The amount of land used for farming increased from 11 millions acres in 1914 to 14 million acres in 1918. However, many farm workers had joined the army, and so much of the work on the extra land was carried out by the new Women's Land Army. Women were asked to sign up for the Women's land army and 30,000 responded immediately. Therefore, the source indicates that the women were good at their jobs and therefore helped their country to win the war and in may respects Britain could not have won the war without this as the factories would have been forced to close down if they had no workers if the women did not take the men's jobs and therefore there would have been no munitions for the soldiers. As we all know, no country can win a war without any weapons and no country can be fit to fight a war it they are under fed! OLGA VAN RAVESTEYN 10 LB 1 ...read more.