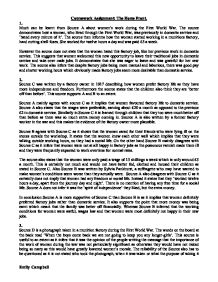 Coursework Assignment: The Home Front. 1. Much can be learnt from Source A about women's work during the First World War. The source demonstrates how a woman, who lived through the First World War, was previously in domestic service and 'hated every minute of it'. The source then informs how the woman started working in a munitions factory, hand cutting shell fuses. She worked for twelve hours a day and was paid �5 a week. However the source does not state that the woman hated this factory job, like her previous work in domestic service. This suggests that women welcomed this new opportunity to leave their traditional jobs in domestic service and take over male jobs. It demonstrates that she was eager to leave and was grateful for her new work. The source also infers that despite factory jobs being more manual and laborious, there was good pay and shorter working hours which obviously made factory jobs seem more desirable than domestic service. 2. Source C was written by a factory owner in 1917 describing how women prefer factory life as they have more independence and freedom. Furthermore the source states that the children also think they are 'better off than before'. ...read more.

4. During the First World War men made it very apparent that they strongly opposed the employment of women. Since 1905 a new form of trade unionism, Syndicalism, had developed in Britain. They planned to use the strike as a weapon to change government policies. After the outbreak of war men hastened to join trade unions which in 1915 encouraged an enormous number of strikes against female workers. This eventually meant that the government were forced to sign agreements with unions to the effect that women would not keep their jobs at the end of the war. However this was certainly not all the action men took. Male employees also showed their disapproval by refusing to help women workers, giving confusing instructions and particularly, playing practical jokes. This can be seen in Source G which is a woman's account written in 1919 of experiences while working during the First World War. The source describes how such pranks included nailing up her drawer and pouring oil over all her work in the night. Here men have outwitted women and this would have made the men feel better about themselves. These pranks could demonstrate how childish the attitude of men was during such a difficult period. ...read more.

Despite propaganda undoubtedly playing a key role in recruitment, its importance cannot be considered as significant as the role of women during the war. Propaganda was not vital to the war effort whereas the recruitment of women was because without them working in the munition factories Britain would have run out of supplies which were vital to the country's chances of victory. The Defense against the Realm Act 1914 (DORA) and the Military Service Act 1916 also played an important role in the war effort. DORA gave the government extensive powers such as closing public houses to prevent employees turning up drunk for work. The Military Service Act meant that 3,500,000 men were conscripted to the armed forces. These were unquestionably useful strategies; however the war could still have been won without them existing, whereas the role of women had a far superior importance. In conclusion the statement 'Without the work of women on the Home Front, Britain could not have won the First World War' is true to a great extent. As previously acknowledged, whilst factors, other than women, were significantly helpful in the war effort, if women had not joined Britain's workforce in munitions factories, it would have been impossible to make enough weapons, ammunitions, and other necessary supplies required to lead Britain to victory ?? ?? ?? ?? Emily Campbell ...read more.