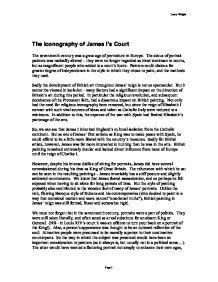 The Iconography of James I&amp;#146;s Court

The Iconography of James I's Court The seventeenth century was a great age of portraiture in Europe. The status of portrait painters was radically altered - they were no longer regarded as hired workmen in courts, but as magnificent people who added to a court's lustre. Painters could claim a far greater degree of independence in the style in which they chose to paint, and the methods they used. Sadly the development of British art throughout James' reign is not so spectacular. But it cannot be viewed in isolation - many factors had a significant impact on the direction of Britain's art during this period. In particular the religious revolution, and subsequent dominance of the Protestant faith, had a disastrous impact on British painting. Not only had the need for religious iconography been removed, but since the reign of Elizabeth I contact with such vital sources of ideas and talent as Catholic Italy were reduced to a minimum. In addition to this, the expense of the war with Spain had limited Elizabeth's patronage of the arts. So, we can see that James I inherited England's cultural isolation from the Catholic continent. But as one of James' first actions as King was to make peace with Spain, he could afford to be a little more liberal with the country's treasures. ...read more.

(I shall now refer to several important portraits of James. See Irene Carrier's James VI and I, King of Great Britain, pages 19 - 25 for reproductions of the portraits in question). Figure 1.18(a) shows James wearing a jewel known as "The Mirror of Great Britain". As well as being an impressive jewel, its name is significant. It indicates that the portrait was made after the Union of Scotland and England. Figures 1.18(b) and (c) also stress James' authority and status by showing him dressed in ornate clothing with such symbols of royalty as the crown jewels or the British crest in the background. Figure 1.19, a portrait of James painted by Van Somer, is probably one of the most ornate of all of James' portraits. In this painting James is standing, in full royal dress of crown jewels and ermine robes, in front of a window - through which the Banqueting House at Whitehall is visible. The fact that this portrait was made about two years before the completion of the Banqueting House shows how proud James was of the building - and how keen to be acknowledged as its patron. Probably the most famous of all state portraits of James I is figure 1.20; Daniel Mytens' James I and VI, painted in 1621. As in other portraits, James is dressed in fine clothing - in this case crimson and white Garter robes. ...read more.

Rubens' art was radically different from that which had dominated Britain during James' reign. He used elements of Baroque and Renaissance style to elevate James to the status of a "British Solomon". He believed that paint itself should have an exciting texture, and not hide behind the objects that it was being used to depict. Many people admire Ruben's ability to animate a large surface, to use the natural colour of a wooden panel as a unifying factor and to "turn forms in and out of a space, and distort them in a direction of an overall rhythm". After a long period of restrained, Realist art in Britain, Rubens, Van Dyke and others who followed in the court of Charles I opened up a new age of art in Britain... Further reading: If I've somehow managed not to bore you to the point of death, then there are some incredibly interesting books (beside the regular AS textbooks I mean, of course...!) that I used to write this little presentation. They are: * "Rubens" - from the "Great Artists Collection" series. * "Five Centuries of Great Art" - as above. * "British Portrait Painters" - as above. * "An Illustrated Cultural History of England" - F. E. Halliday * "A History of Western Art" - * * * * ?? ?? ?? ?? Laura Wright Page 1 ...read more.