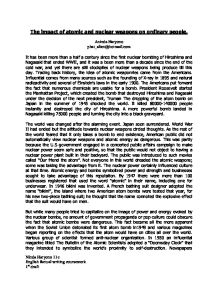 The impact of atomic and nuclear weapons on ordinary people.

The impact of atomic and nuclear weapons on ordinary people. Aninda Haryono [email protected] It has been more than a half a century since the first nuclear bombing of Hiroshima and Nagasaki that ended WWII, and it was a been more than a decade since the end of the cold war, and yet there are still stockpiles of nuclear weapons being produce till this day. Tracing back history, the idea of atomic weaponries came from the Americans. Influential comes from many sources such as the founding of X-ray in 1895 and natural radioactivity and several of Einstein's laws in the early 1900. The Americans put forward the fact that numerous chemicals are usable for a bomb. President Roosevelt started the Manhattan Project, which created the bomb that destroyed Hiroshima and Nagasaki under the decision of the next president, Truman The dropping of the atom bomb on Japan in the summer of 1945 shocked the world. ...read more.

By 1947 there were more than 100 businesses registered that used the word "atomic" in their name, including one for underwear. In 1946 bikini was invented. A French bathing suit designer adopted the name "bikini", the island where two American atom bombs were tested that year, for his new two-piece bathing suit; he thought that the name connoted the explosive effect that the suit would have on men. But while many people tried to capitalize on the image of power and energy evoked by the nuclear bombs, no amount of government propaganda or pop culture could obscure the fact that atomic bombs were dangerous. This fact became all the more apparent when the Soviet Union detonated its first atom bomb in1949 and various magazines began reporting on the effects that the atom would have on cities all over the world. Various group of scientist formed anti-nuclear organization. In 1950 an influential magazine titled The Bulletin of the Atomic Scientists adopted a "Doomsday Clock" that they intended to symbolize the world's proximity to self-destruction. ...read more.

After many treaties and pact signed there is no indication that the number of weapons is decreasing. The public has different opinions about them till this day. The anxiety of atomic and nuclear weapons today has lessened. There's a new form of threat to the population now, terrorism. Since the world trade centre collapsed on September 11th 2000, the world was changed like it did when the first atomic bomb exploded. This time Islamic extremist group such as Al-Qaeda was the fear of many. Most people in this world blame America for inventing the atomic bomb. If America didn't have nuclear and atomic weapons in the first place then no other country would feel the need to have any either. Try for a worldwide disarmament at the same time. Not at one time but a fraction of total weapons at a time. Then we can see what America feels like having weapons inspector crawling over their country. "The world is like a lifeboat. If we start punching holes in each other's side of the boat, we're all going to drown." Aninda Haryono [email protected] Ninda Haryono 11c English factual writing coursework 1st draft ...read more.