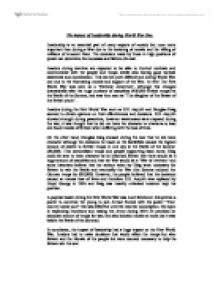 The impact of leadership during World War I

The impact of Leadership during World War One. Leadership is an essential part of many aspects of society but none more important than during a War due to the lowering of morale and the killing of millions of innocent lives. The decisions made by those in high positions of power can determine the successes and failure of a war. Leaders during wartime are expected to be able to Control motivate and communicate with the people and troops whilst also having good tactical awareness and coordination. This can be quite difficult and during World War one due to the fluctuating morale and support of the War. ...read more.

H.H Asquith showed strength during peacetime, however weaknesses were exposed during the war, it was thought that he did not have the character or charisma to lead and boost morale of Britain when suffering with the loss of lives. On the other hand, Douglas Haig showed during the war that he did have character although the decisions he made on the battlefield caused the highest amount of deaths to British troops in one day at the Battle of the Somme (60,000). This demoralised troops and people supporting back home. Haig could be seen to have character as he informed Britain that there would be a huge amount of casualties and ...read more.

A popular leader during the First World War was Lord Kitchener. His printed a poster to convince the young to join Armed Forced with his poster "Your country needs you!" this was effective until the need for conscription. His input in expanding munitions and raising the Army during 1914-15 provided an adequate amount of troops for war, but also boosted morale at home (as it was before the Battle of the Somme). In conclusion, the impact of leadership had a huge impact on the First World War. Leaders had to make decisions that would affect the troops but also Britain and the Morale of the people but were deemed necessary to help the Britain win the war. ...read more.