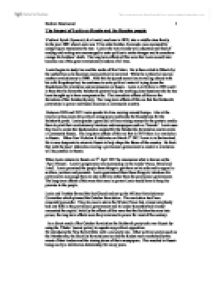 The Impact of Lenin on Russia and the Russian people

The Impact of Lenin on Russia and the Russian people Vladimir Ilyich Ulyanov (a.k.a Lenin) was born in 1870, into a middle class family. In the year 1887 when Lenin was 17 his elder brother Alexandra was executed for conspiring to assassinate the tsar. Lenin who was already well educated and fond of reading and writing was encouraged to enter politics to make changes and to somehow avenge his brothers' death. The long term effects of this were that Lenin would later become one of the great revolutionary leaders of all time. Lenin begins to study law and the works of Karl Marx. He is then exiled to Siberia by the authorities as he becomes more politically involved. Whilst he is there he marries another revolutionary in 1898. After this he spends some time travelling abroad with his wife Krupskaya but, he continues to write political material laying down the foundations for revolution and communism in Russia. Lenin is in Britain in 1903 and it is there that he forms the Bolshevik party to help the working class Russians who he has been brought up to have compassion for. ...read more.

Initially the effects of this were that the Bolsheviks came into power, the long term effects were they remained in power for most of the century. As a direct result of the October Revolution the Bolshevik party took over Russia by using the 'Cheka' (secret police) to squash any political opposition. He introduces the New Soviet State with a one party rule. Other political parties such as the Mensheviks, the Socialist Revolutionaries and the Kadets were weakened by the arrest of their leaders and the closing down of their newspapers. This resulted in Russia being run by a totalitarian dictatorship for many years. Initially Lenin realised the first need was for peace, he arranged a cease fire with Germany and discussed a peace treaty. The treaty of Brest Litovsk was eventually signed in March 1918. This ended the war between Russia and Germany. Lenin was unwilling to sign the treaty at first because the terms of the treaty were harsh and it meant Russia would lose a lot of territory. However, Lenin was given no choice. The Germans had invaded Russia and were threatening Petrograd. Lenin felt the Germans would destroy his government, and he was sure the treaty would not be in place for long as World Revolution was soon to follow. ...read more.

There was a three week struggle and many of the rebel sailors were killed. After the Kronstadt uprising Lenin responded by introducing the New Economic Policy. He made agreements with the peasants to allow them to keep or sell any food they had left after the government had taken a fixed amount. In industry the smaller factories were returned to their previous owners (privatised). After the N.E.P there were great improvements in Russia. The results of the N.E.P brought about Trotskys criticism of Lenin. He accused Lenin of being capitalist. Lenin realised that in order to take a giant leap sometimes one must take a couple of paces back first. The creation of the N.E.P brought about the rise of the Russian economy. Lenin and the communist party brought many changes to Russia. Russia had been governed by the tsar and his family for three hundred years. When Lenin gained power he brought about a lot of reforms and in effect modernised Russia to some extent. He also brought Russia through the civil war. The major effects of Lenin on Russia and the Russian people are the introduction to communism in Russia and that he will be remembered as a great leader and had the respect and admiration of a lot of Russian people. 1 Barbara Heselwood ...read more.