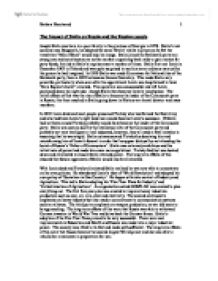 The Impact of Stalin on Russia and the Russian people

The Impact of Stalin on Russia and the Russian people Joseph Stalin was born to a poor family in the province of Georgia in 1879. Stalin's real surname was Djugasvili; he adopted the name 'Stalin' whilst in prison as he felt the translation 'Man of Steel' would help his image. Stalin joined the Bolshevik party as a young man and soon became an active member organizing bank raids to gain money for party funds; this led to Stalin's imprisonment a number of times. Stalin first met Lenin in December 1905 in Finland and was quite surprised to see him as an ordinary man unlike the person he had imagined. In 1918 Stalin was made Commissar for Nationalities of the Bolshevik party, then in 1922 he became General Secretary. This made Stalin very powerful, particularly when soon after his appointment Lenin was hospitalised to have 'Dora Kaplan's bullet' removed. The operation was unsuccessful and left Lenin paralysed down his right side. Joseph Stalin then became Lenin's mouthpiece. The initial effects of this was the rise of Stalin to become the leader of the Communist party in Russia, this then resulted in Stalin going down in History as a brutal dictator and mass murderer. In 1924 Lenin died and most people presumed Trotsky who had formed the Red Army and who had been Lenin's right hand man would become Lenin's successor. ...read more.

Russia's armaments factories were moved beyond the Ural Mountains to avoid bombardment by the Germans. Without the improvements made to the railway system during the five year plans this would have been impossible. This enabled Russian victory in World War Two and resulted in her being a nuclear superpower. Stalin knew that for Russia's industry to succeed she would have to be able to feed herself hence his policy of Collectivisation of Agriculture. Stalin believed that at the very least the peasant farmers should be providing food for the factory workers if the five-year plans were going to succeed. The Collectivisation of Agriculture provided Russia with self-sufficiency in a time of global depression. The outcome of this was that Stalin regained control of the peasants and was able to improve on Industrialisation. Collectivisation with its introduction of larger farms and tractors also helped modernise Russia but not without its cost. One brutal example of Stalin's unwillingness to adopt any other policy other than Collectivisation was his treatment of the Kulaks in the Ukraine. The Kulaks were richer peasants who had worked harder under Lenin's rule. They refused to give up their crops and animals to Stalin and chose to slaughter their livestock and burn their crops rather than give in to the brutal dictator. ...read more.

Many people suffered simply as a result of jealous neighbours and workers. The purges created a sense of hysteria and people were willing to accuse others of crimes to demonstrate their own loyalty. These purges resulted in many of Russians most talented people being murdered. Anyone with talent was seen as a threat to the ever increasingly paranoid Stalin. The purges of the people resulted in Stalin's 'Reign of Terror'. Stalin's time as leader of Russia gained him fame for three main reasons. The Five-Year Plans, Collectivisation and The Purges. Stalin made Russia into a major industrial nation when other countries were in depression and he literally modernised Russia. The workers who did not offend the state were better off than under the reign of the tsar. Russia's military forces were benefiting from her industrial growth and whilst Stalin retained power there was a stable government. People gained better access to education and medical care. However millions had died in the famine after the failed experiment of Collectivisation. Stalin did make Russia into a great power but there was an enormous price to pay for it. Millions of people were starved or murdered under Stalin's brutal rule. Stalin led Russia with an iron fist. The long-term effects of this were the only reason people idolised Stalin was because they were too frightened to do anything else and Stalin's influence lived on through Krushtov and Brezhnev, they too would not allow any senior opposition. 1 Barbara Heselwood ...read more.