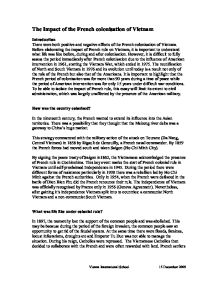 The Impact of the French colonisation of Vietnam

The Impact of the French colonisation of Vietnam Introduction There were both positive and negative effects of the French colonisation of Vietnam. Before elaborating the impact of French rule on Vietnam, it is important to understand what life was like before, during and after colonisation. However, it is difficult to fully assess the period immediately after French colonisation due to the influence of American intervention in 1961, starting the Vietnam War, which ended in 1975. The reunification of North and South Vietnam in 1976 and its evolution until today is a result not only of the role of the French but also that of the Americans. It is important to highlight that the French period of colonisation was for more than 90 years during a time of peace while the period of American intervention was for only 15 years under difficult war conditions. To be able to isolate the impact of French rule, this essay will limit its extent to civil administration, which was largely unaffected by the presence of the American military. How was the country colonised? In the nineteenth century, the French wanted to extend its influence into the Asian territories. ...read more.

This soon created a French and Vietnamese high class who owned most of the land. Under French rule, by 1939, 80 % of a population of 20 million was illiterate and only 15 % of the children received any schooling. Vietnam had only one university with 700 students. Medical care was not well organised and there were only 2 physicians for every 100,000 Vietnamese. The Vietnamese had no freedom and were not allowed to travel outside their districts without identification papers. They were not allowed to publish any books without French censorship. Vietnamese were also excluded from participating in industry and trade. Did life improve or get worse for the people living under colonial rule? Civil Administration and Infrastructure In 1897, 40 years after the first invasion, Paul Doumer, the Governor General of French Indochina, imposed French rule directly at all levels of administration. There were about 5000 French administrators ruling the Indochinese Union (included Laos and Cambodia) of 30 million inhabitants. The major part of French policies impoverished the people of Indochina. Like any other colony colonised by a European power, the Vietnamese were neglected while the French gained wealth from all the natural resources the country had to offer. ...read more.

The majority of school-aged children did not go to school and there was a widening gap between the high class and the peasants especially in terms of education. What were the benefits and costs of colonial rule (for the Vietnamese)? Benefits: * Infrastructure - irrigation systems, public railways etc * Civil Administration - more structured * Monarchy abolished - feudal system no longer in effect Costs: * Benefits/profits from natural resources went to the French * Inadequate schools, school systems - low literacy rate * No civil liberties - need of identification papers etc * Deprived from participation in industry & trade * Redistribution of land to French settlers In addition to all these costs, there is another indefinable cost of any country being occupied by a foreign country, which can never replace the benefit of self-government. This essay pointed out both the positive and the negative effects of the French rule in Vietnam. It was not easy to distinguish which of the differences of ways of life before, during and after the colonisation period were the results of the French rule. After distinguishing these impacts and weighing them out, the French colonisation proved to give more costs than benefits to the Vietnamese population. ...read more.