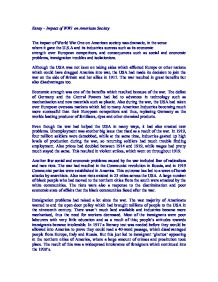 The impact of World War 1 on American society.

Essay - Impact of WW1 on American Society The impact of World War One on American society was dramatic, in the sense where it gave the U.S.A and its industries success such as its economic strength over European competitors, and consequences such as social and economic problems, immigration troubles and isolationism. Although the USA was not keen on taking sides which affected Europe or other nations which could have dragged America into war, the USA had made its decision to join the war on the side of Britain and her allies in 1917. The war resulted in great benefits but also disadvantages too. Economic strength was one of the benefits which resulted because of the war. The defeat of Germany and the Central Powers had led to advances in technology such as mechanisation and new materials such as plastic. ...read more.

Another few social and economic problems caused by the war included fear of radicalism and race riots. The war had resulted in the Communist revolution in Russia, and in 1919 Communist parties were established in America. This outcome has led to a wave of bomb attacks by anarchists. Also race riots existed in 23 cities across the USA. A large number of black people who had moved to the northern cities from the south were attacked by the white communities. The riots were also a response to the discrimination and poor economic state of affairs that the black communities faced after the war. Immigration problems had raised a lot since the war. The vast majority of Americans wanted to end the open-door policy which had brought millions of people to the USA in the nineteenth century. ...read more.

But, a large number of people believed that America had done way more than enough in the First World War. The majority of Americans did not want their soldiers to be injured or killed trying to resolve problems around the world. In 1919 and 1920 Congress disagreed to support Woodrow Wilson and rejected the league and soon rejected Wilson. The people of America wanted to go back to what life had been like before the war, so they voted for President Harding who had planned to do exactly that, of which what he called 'normalcy'. So American society has been changed drastically as a result of WW1 and because of it, America is what it is today with its world leading productions and economic strength. The problems with immigration and isolationism have turned to positive aspects of America, making it one of the most multi-culturalised and coalition country of the world today. ...read more.