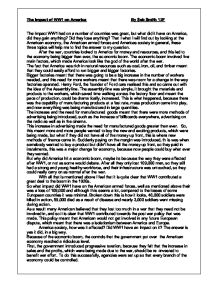 The impact of WW1 on America.

The impact of WW1 on America By Seb Smith 12F The Impact WW1 had on a number of countries was great, but what did it have on America, did they gain anything? Did they lose anything? That I what I will find out by looking at the American economy, the American armed forces and Americas society in general, these three topics will help me to find the answer to my question. After the war, countries looked to America for money and resources, and this led to the economy being bigger than ever, the economic boom. The economic boom involved five main factors, which made America look like the god of the world after the war. The fact that America was rich in natural resources such as coal, iron, oil, and timber meant that they could easily afford to run bigger and bigger factories. Bigger factories meant that there was going to be a big increase in the number of workers needed, and this need for more workers meant that there was room for a change in the way factories operated. Henry Ford, the founder of Ford cars realised this and so came out with the idea of the Assembly line. ...read more.

As a result many American believed that they lost too much in a war that they need not be involved in, and so it is clear that WW1 contributed towards the post war policy that was made. This policy meant that American would not get involved in any future European dispute, which meant that there was a isolationism between America and Europe. America society, how was it affected? Did WW1 have an Impact on it? The answer is yes it did, in a big way. Because of the economic boom, the controls that the government put over the American economy reached a ridiculous level. First, the government introduced progressive taxation, because they felt that the increase in sales and the profits, which were being made due to the war, should be re-invested to benefit war effort. To do this successfully, agencies were set up so that every branch of the economy could be controlled. To start there was the War industries board, which allocated scarce materials fairly and determined productions priorities, which meant that products were standardised. Prices stayed fixed but still the efficiency levels still managed to increase. As well as the war industries board there was another board that covered the food industries. ...read more.

Prohibition was in place quickly because of the campaign by the anti saloon league who believed that it produced inefficiency and increased absenteeism in the work place and that it was immoral and un patriotic because a lot of the beer for example was brewed in Germany. The 18th amendment was introduced in December 1918 and put in place a month later. The final impact on society was the fact that finally women were receiving the franchise. This was a slow process but by April 1917 11 states mainly in the west allowed women the right to vote, although most of the government disagreed with female suffrage since the war women had moved from being house wives in the kitchen to being bread providers in the factories so all believed they should have the right. In 1918 the 9th amendment was passes allowing the women to vote and by August of the following year it was made the law. It is clear how much WW1 did contribute to the change of attitude that dominated the roaring twenties, and again shows what actual impact the war did have on America. In summary all the above quite clearly shows what sort of affect the First World War had on the economy, the armed forces and the American society in general. ...read more.