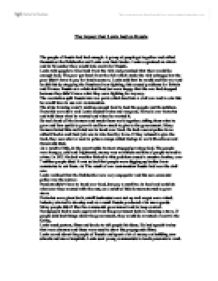 The impact that Lenin had on Russia

The impact that Lenin had on Russia The people of Russia had had enough. A group of people got together and called themselves the Bolsheviks and Lenin was their leader. Lenin organized an attack and in November they would take control of Russia. Lenin told people to take land from the rich and promised that there would be enough food. The poor got land from the rich which made the rich unhappy but the poor didn't have to pay for land anymore. Lenin said that he would end the war and he did this by stopping the Russians from fighting, this caused problems for Britain and France. ...read more.

Many farmers hated this and tried not to hand over food. He had a secret police force called Checka and their job was to take food by force. If they refused to give the food, they were shot or sent to prison camps called Gulags to work like slaves and thousands died. As a result of this, in the countryside farmers stopped growing food. The people were hungry, cold and frightened, money was worthless and lots of people turned to crime. In 1921 the bad weather linked to this problem caused a massive famine, over 7 million people died. It was so bad that people were digging up bodies from cemeteries to eat them. ...read more.

Lenin used posters, films and books to tell people his ideas. He had special trains that were cinemas and these were used to show his propaganda films. Lenin cared about the people of Russia and spent a lot of money on building new schools and more hospitals. Lenin sent young communists to teach peasants to read. This would educate them, so they would be able to read Lenin's ideas and more hospitals meant that they would be better taken care of. Lenin thought women should have equal rights to men and made it easier for women to get divorced and go to work. Religion could not be taught to people under 15 and had many priests sent to Gulags. Lenin led Russia into the revolution and loved the people of Russia and they loved him for what he did. ...read more.