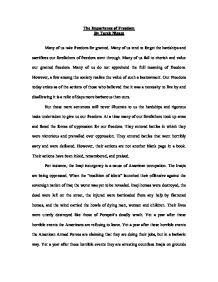 The Importance of Freedom

The Importance of Freedom By Tarek Nigam Many of us take freedom for granted. Many of us tend to forget the hardships and sacrifices our forefathers of freedom went through. Many of us fail to cherish and value our granted freedom. Many of us do not apprehend the full meaning of freedom. However, a few among the society realize the value of such a bestowment. Our Freedom today exists as of the actions of those who believed that it was a necessity to live by and disallowing it is a relic of days more barbarous than ours. But those mere sentences will never illustrate to us the hardships and rigorous tasks undertaken to give us our freedom. At a time many of our forefathers took up arms and faced the forces of oppression for our freedom. ...read more.

To women this was a symbolic victory. The ballots could finally spell out a woman's name on it. The fall of communism was another symbolic victory for the fighters of freedom. During the Soviet Era, freedom of speech and religious freedom was forbidden. Citizens of the Soviet Union were forced to accept conformity. Putting aside their religious, economical, and political differences accomplished this. Even though, this achieved stability citizens were deprived of religion, political activity, and art. This only angered the citizens and brought about the fall of communism. By prohibiting the freedom of individuals it causes them to take extensive measures to obtain it. Even though, conformity brings about stability it is not so spectacular as instability. Conformity deprives people of the beauties of life. Conformity creates a non-expensive civilization. Freedom is a moral right and its exclusion is a relic of days more barbarous than ours. ...read more.