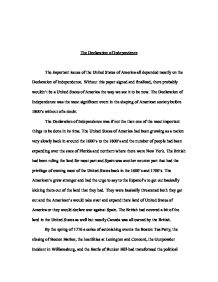 By the spring of 1776 a series of astonishing events-the Boston Tea Party, the closing of Boston Harbor, the hostilities at Lexington and Concord, the Gunpowder Incident in Williamsburg, and the Battle of Bunker Hill-had transformed the political landscape. George III proclaimed the colonies to be in open rebellion, and Thomas Paine's pamphlet Common Sense, published in January 1776, attacked monarchical government and called upon the American colonies to declare themselves free and independent. American's had another battle and fought and won in Virginia, and the port city of Norfolk had been fired on by the British fleet with nine hundred houses destroyed by the fires started by the cannonballs by the American's. ...read more.