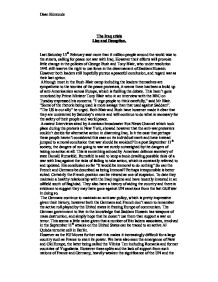 The Iraq crisis - Lies and Deception.

The Iraq crisis Lies and Deception. Last Saturday 15th February saw more than 6 million people around the world take to the streets, calling for peace not war with Iraq. However their efforts will provoke little change in the policies of George Bush and Tony Blair, who under resolution 1441 still reserve the right to use force in the disarmament of Saddam Hussein. However both leaders still hopefully pursue a peaceful conclusion, and regard war as their last option. Although most in the Bush-Blair camp including the leaders themselves are sympathetic to the worries of the peace protesters, it seems there has been a build up of anti-Americanism across Europe, which is fuelling the debate. This hasn't gone unnoticed by Prime Minister Tony Blair who in an interview with the BBC on Tuesday expressed his concerns. "I urge people to think carefully," said Mr Blair. "Some of the rhetoric being used is more savage than that used against Saddam". "The US is our ally" he urged. Both Blair and Bush have however made it clear that they are undeterred by Saturday's events and will continue to do what is necessary for the safety of their people and world peace. ...read more.

However as the EU Moves further east this makes it increasingly difficult for a large country such as France to exert its power. We have also seen the emergence of New and Old Europe, the latter being called the Vilnius Ten including Romania and former countries of Yugoslavia. However these splits and the lack of support from such nations of France and Germany, heavily weaken the significance of the UN and the pressure on Saddam Hussein to comply with UN resolution 1441 and disarm. This only increases the likeliness of war. Condoleeza Rice, The United states national security advisor said the world needed to "pull itself back together". "It's time for this to end" After all Saddam has been playing these games for more than 12 years now. The UN Security Council resolution 687 of April 1991 set out the cease-fire terms for ending the gulf war. Iraq has still failed to comply with the following: A: Accept the destruction, removal or rendering harmless of its nuclear, chemical and biological weapons, and ballistic missiles with a range of over 150 kilometres; and also and any research, development and manufacturing facilities associated with the above. ...read more.

"There has been a discussion within his circle to set up what they call a chemical belt around Baghdad using his chemical weapons to entrap the residents of Baghdad inside," he said. He also said the reports that Saddam had several look-alikes to confuse potential assassins were "absolutely true" It is extremely important that we remember what the Bush-Blair led policy on Iraq is trying to achieve rather than shying away against the need for action. Saddam Hussein has used chemical weapons in the torturing of not just neighbouring states of Iran and Kuwait but his own people. 95% of the Iraqi population are waiting to be liberated from Saddam Hussein's Regime. Iraqi's have been dying everyday for the last 30 years at the hands of Saddam Hussein. Iraqi's also suffer under a poor health service, water and sewer systems, which has led to a spread of Polio. The attacks of September 11th on the US served as a chilling reminder that we are not kept safe just by the presence of oceans. The world must act now and act strongly by showing zero to the emergence of rebel states and terrorist cells, which have wormed their way into Europe and the US. For our Liberty and the freedom of the Iraqi people. Word Count:1275 Dean Edmunds ...read more.