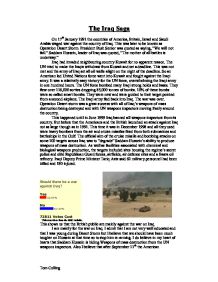 The Iraq Saga On 17th January 1991 the countries of America, Britain, Israel and Saudi Arabia waged war against the country of Iraq. This was later to be known as Operation Desert Storm. President Bush Senior was quoted as saying, "We will not fail." Saddam Hussein, leader of Iraq was quoted, "The mother of all battles is underway." Iraq had invaded neighbouring country Kuwait for no apparent reason. The UN tried to make the Iraqis withdraw from Kuwait and set a deadline. This was not met and the army of Iraq set all oil wells alight on the night of the deadline. So an American led United Nations force went into Kuwait and fought against the Iraqi army. It was a relatively easy victory for the UN force, overwhelming the Iraqi army in one hundred hours. ...read more.

The official aim of the cruise missile and bombing attacks on some 100 targets across Iraq was to "degrade" Saddam Hussein's ability to produce weapons of mass destruction. As well as facilities associated with chemical and biological weapons production, the targets included sites housing the regime's secret police and elite Republican Guard forces, airfields, air defence sites and a Basra oil refinery. Iraqi Deputy Prime Minister Tariq Aziz said 62 military personnel had been killed and 180 injured. Should there be a war against Iraq? Yes 32.57% No 67.43% 72811 Votes Cast This was taken from the BBC website. This shows us that the British public are mainly against the war on Iraq. I am mainly for the war on Iraq. I admit that I am not very well educated and that I was young during Desert Storm but I believe that we should have been much tougher on Hussein at that time so to stop him re-arming. ...read more.

Is this about oil? Iraq has the second largest untapped reserves of oil in the world after Saudi Arabia. The powerful American oil industry is closely connected with the Bush administration. Some commentators believe that US oil companies are exerting pressure on the president to topple Saddam Hussein and gain control of this vast resource. Others argue, however, that the US has plenty of oil and is unlikely to commit to such a vast and risky undertaking as a war in Iraq for this reason alone. Is this part of the war on terror? The US pressure on Iraq has grown out of the war on terror. Strictly speaking, it is not part of the war on Osama Bin Laden's al-Qaeda network since Iraq has not been directly linked with Bin Laden, though Washington has tried to hint at recent connections. It is more a part of the wider American war on potential threats around the world. Tom Culling ...read more.