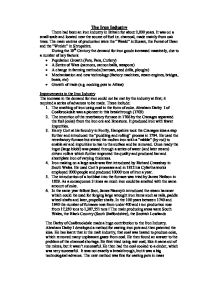 The Iron Industry There had been an iron industry in Britain for about 2,000 years. It was on a small scale and located near the source of fuel i.e. charcoal, made mainly from oak trees. The main centres of production were the "Weald" in Sussex, the Forest of Dean and the "Wrekin" in Shropshire. During the 18th Century the demand for iron goods increased massively, due to a number of key factors: * Population Growth (Pots, Pans, Cutlery) * A Series of Wars (cannons, cannon balls, weapons) * A change in farming methods (harrows, seed drills, ploughs) * Mechanisation and new technology (factory machines, steam engines, bridges, boats, etc) * Growth of trade (e.g. cooking pots to Africa) Improvements in the Iron Industry The increase in the demand for iron could not be met by the industry at first; it required a series of advances to be made. ...read more.

5. The introduction of a hot blast into the furnace was tried by James Neilson in 1829. As a consequence 3 times as much iron could be smelted with the same amount of coke. 6. In the same year fellow Scot, James Nasmyth introduced the steam hammer which could be used for forging large wrought iron items such as rails, paddle wheel shafts and later, propeller shafts. In the 100 years between 1740 and 1840 the number of furnaces rose from under 400 and iron production rose from 17,350 tons to 1,387,551 tons! The main producing areas were South Wales, the Black Country (South Staffordshire), the Scottish Lowlands The Darby of Coalbrookdale made a huge contribution to the Iron Industry. Abraham Darby I developed a method for casting iron pots and then patented the idea. He has learnt that in the malt industry, that coal was heated to produce coke, which removed many unpleasant gases from coal. ...read more.

He also significantly improved the quality, as the price was rising because of war, the price of charcoal was inceasing tremendously, and so Darby carried on experimenting, with different cooking methods, blast pressure, and different balances in ingredients. He once went one week without sleep. He then finally got the quality he wanted and took it to his forgers, who agreed. Over the next 20 years, the company made huge profits, and his work paid off selling pig iron to manufacturers. Again, when Abraham Darby II died in 1763, his son in law Richard Reynolds took over till 1768, when Abraham Darby III was old enough to take over. Darby II was more of an innovator, making the worlds first iron bridge, a huge advertisement for his company. He was a good employer, buying farms and good homes to attract good workers. But in 50 years time, iron had improved so much that iron could be used for boats, steam engines and wheels. Soon there was a huge demand for the goods made by the company. ...read more.