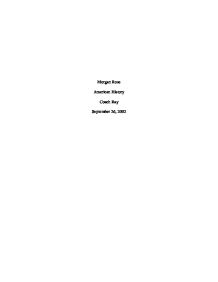 The Iroquois Nation, spanning from 1400 or even 1100 A.D. to 1831, was the longest lasting native empire in history. The Iroquois were the only North American native civilization, and the only group of natives in North America to ...

Morgan Rose American History Coach Ray September 26, 2002 The Iroquois Nation, spanning from 1400 or even 1100 A.D. to 1831, was the longest lasting native empire in history. The Iroquois were the only North American native civilization, and the only group of natives in North America to incorporate multiple tribes into a democratic state, and without influence of outside parties. The Six Nations, as they were called, were a true democracy and one of the only ones since Athens in Ancient Greece. Like any great democracy, the Iroquois Nation had a legislative government consisting of fifty representatives from the five nations; (the sixth was the Tuscarora, a native group of North Carolina, driven out by English settlers and incorporated into the nation; however, they were disenfranchised because they were not part of the original five.)(Bial, 14) The Iroquois also had a written constitution called the Great Binding Law, or Gayanashagowa. (Page) "The way the Iroquois governed their great nation would later be reflected in the American Articles of Confederacy and the Constitution." (Sultzman) The Iroquois Nation was the greatest North American civilization and it was a major power in colonial history, as well as culturally being an example of a true democracy. The history of the Iroquois is one of supreme dominance and great diplomacy. The League of Iroquois dominated the area of the northernmost part of Pennsylvania to the St. ...read more.

The Iroquois had decimated the already small beaver population in their territory and they were forced to expand and conquer to supply the Europeans with furs. The French-Iroquois relationship had become much better, mostly because the Iroquois had found that they could play both sides of the fur trade, remain neutral, and prosper. Great Britain began colonizing New England in the 1620's and became a factor in the fur trade as well. (Sultzman) The Beaver Wars were an important part in the history of the Iroquois because they gained diplomatic control over the fur trade and were able to gain power and land from armaments received during trading. The Iroquois, when they were adequately armed, were able to trade with multiple nations without forming trade allegiances like many other Indian tribes. The Iroquois were able to exploit their power and gain economic success: "At this point, no power in North America could have stood against the Iroquois League, even the Europeans. However, rather than choosing to confront the Europeans, the Iroquois decided to deal with them as equals and use their firearms and trade goods to their own advantage." (Hoxie, 100-103) Because the Iroquois were such a great power, they were also able to eliminate their competition without consequence from the Europeans. However, such neutrality would soon dissolve as the British Colonies pushed into French Territory. ...read more.

This logic is what brought the Iroquois into the American Revolution. The Iroquois participated in ambushes and other guerrilla tactics with Tories and other unorganized militia. These militia would raid small towns, and American held forts, and casualties for each incident were relatively small for both sides of the conflict. However, with the Treaty of Paris of 1783, American government was now in control and one of the first actions passed by the new government allowed the colonization of the so-called "Northwest Territory", the very lands which the Iroquois inhabited (Sultzman) The Iroquois Nation had no way of defending its lands because it was concerned with its dwindling population, and the secularism circulating throughout the tribes. The Iroquois suffered great losses at the hands of the colonists: "From a pre-war population of 8,000, fewer than 5,000 Iroquois survived the war, 2,000 of whom had moved to Canada." (Sultzman) With a population of 3,000 the Iroquois "dynasty" in North America had ended. The Iroquois were a dominant civilization that spanned approximately four centuries. Their way of life was primitive; they had no written language. Yet they were truly civilized in their unique form of government, one that influenced the United States. The image of the noble "savage" does not apply to the Iroquois. For 200 years they were the most dominate force on continent of North America. It was the Iroquois rational thought and diplomacy that brought its civilization to an abrupt halt, and ended an era of Native Influence on the global economy. ...read more.