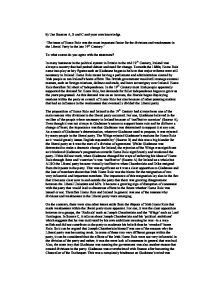 'The issue of Home Rule was the most important factor for the divisions and weaknesses in the Liberal Party in the late 19th Century.' To what extent do you agree with the statement?

b) Use Sources A, B and C and your own knowledge. 'The issue of Home Rule was the most important factor for the divisions and weaknesses in the Liberal Party in the late 19th Century.' To what extent do you agree with the statement? In many instances in the political system in Britain in the mid 19th Century, Ireland was always a country that had probed debate and need for change. Towards the 1880s, Home Rule came into play as key figures such as Gladstone began to believe that major reforms were still necessary in Ireland. Home Rule meant having a parliament and administration elected by Irish people to run Ireland's home affairs. The British government would still manage external matters, such as foreign relations, defence and trade, and have sovereignty over Ireland. Home Rule therefore fell short of independence. In the 19th Century most Irish people apparently supported the demand for Home Rule, but demands for fuller independence began to grow as the years progressed. ...read more.

This was significant as it was a clear opposition to Gladstone and the loss of members shows that Irish Home Rule was the blame for the resignation of two very influential and important members. The importance of this resignation lay also in the fact that it became clear now in and outside the party that there was growing disagreement between the Liberal Unionists and MPs. It became a growing sign of disruption of consensus with the party that would lead to disastrous effects in the future whether Home Rule was issued or not. Therefore Home Rule and Ireland in general was one of the reasons why divisions and weaknesses in the Liberal party were emerging. On the contrary, there were also other issues aside from the dispute of Irish Home Rule that made weaknesses within the liberal party more apparent. For one, it was the clear opposition between two groups, the 'Radicals' such as Joseph Chamberlain and the 'Whigs' such as Lord Hartington. ...read more.

but the Sudan Crisis had become a set back in any progression of the liberal party as a team. In conclusion, I believe that because Gladstone was so in tune with making Home Rule successful, it clouded the prospect of disaster and division. I believe that this created the divison within the party more than the debate of Irish Home Rule. It was bad that people in his own party were beginning to stray him but even worse when the liberals moved to the conservatives; it shows that there was more to the weaknesses in the party than just the dispute about Home Rule, and that people in the liberal party seemed to be unhappy with other methods of Gladstone's in the past (Such as social reform etc). Suffice to say, I believe that Gladstone's character and ways of handling the Irish matter created most division, along with his method of governing previously. Regardless, I still believe that the Irish Home Rule dispute played a completely vital role in dividing the party as it was a catalyst for division, but not the main cause for the weakness of the liberal party. ...read more.