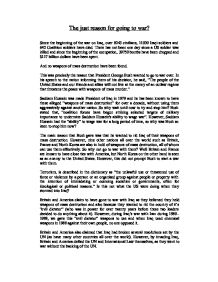 The just reason for going to war?

The just reason for going to war? Since the beginning of the war on Iraq, over 8243 civilians, 11000 Iraqi soldiers and 642 Coalition soldiers have died. There has not been one day since a US soldier was killed and since the beginning of the occupation, 39750 bombs have been dropped and $117 billion dollars have been spent. And no weapons of mass destruction have been found. This was precisely the reason that President George Bush wanted to go to war over. In his speech to the nation informing them of his decision, he said, "The people of the United States and our friends and allies will not live at the mercy of an outlaw regime that threatens the peace with weapons of mass murder." Saddam Hussein was made President of Iraq in 1979 and he has been known to have these alleged "weapons of mass destruction" for over a decade, without using them aggressively against another nation. So why wait until now to try and stop him? Bush stated that, "coalition forces have begun striking selected targets of military importance to undermine Saddam Hussein's ability to wage war". However, Saddam Hussein had the "ability" to wage war for a long period of time, so why was Bush so keen to stop him now? The main reason that Bush gave was that he wanted to rid Iraq of their weapons of mass destruction. ...read more.

So what about the money being spent on the Iraq mission. Where did that come from? Well, from taxpayers money, and as taxes are paid by everyone, then there are many of us out there have paid money towards a war that we did not want. On the theme of money, spokespeople from the White house as well as the President himself have continually stated that the war is not about gaining free access to Iraq's oil supply, which has been the country's main export. However, it is hard to believe this argument as major contracts have already been given to US companies when the time for rebuilding comes. And when the time for rebuilding does finally come, who will be willing to pledge how much? Reconstruction of houses, hospitals, schools and other buildings could cost as much as $105 billion. The British government has pledged �240 million in aid to Iraq, but spent �3 billion on the war. The same can also be said for America who will have undoubtedly spent more on starting the war than on fixing up the mess it left behind. This mess also includes the remains of cluster bombs that have been dropped that often remain unexploded and this poses a huge threat to civilians. Also environmental damage will be caused by the radioactivity in the bombs as well as threats of cancer. ...read more.

When I got home that day, I found my father with a bullet hole through his chest." This was just one of the many terrible things that he did as a leader to his country and for this, he must be apprehended. But was going to war really the right way to do it? Over sixty member states of the UN debated over the situation in Iraq and many agreed that all peaceful methods must first be explored before any resort to war could be considered. But did this really happen? After three moths of searching, weapons inspectors that were sent into Iraq by the UN were ordered out, however, in the time that they were there, they found nothing. And since the end of the war, no weapons have been found. So was it all for nothing? Although the coalition forces did manage to capture the "evil dictator" himself, no weapons have been found and although this has been good news for the Iraqi people, it has left them in a worse state than they were before, as many houses, hospitals and buildings have been destroyed and the loss of civilian life has been great. So were the coalition forces wrong to go in? Who knows? Good has come out of it, as now the Iraqi people no longer feel oppressed, however, it will be a long time before they get back to the country they were before the economic sanctions were placed on them by the UN. ?? ?? ?? ?? ...read more.