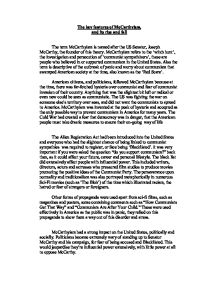 The key features of McCarthyism, and its rise and fall

The key features of McCarthyism, and its rise and fall The term McCarthyism is named after the US Senator, Joseph McCarthy, the founder of this theory. McCarthyism refers to the 'witch hunt', the investigation and persecution of 'communist sympathizers', these are people who believed in or supported communism in the United States. Also the term is descriptive of the outbreak of panic and worry about communism that swamped American society at the time, also known as the 'Red Scare'. American citizens, and politicians, followed McCarthyism because at the time, there was far-fetched hysteria over communist and fear of communist invasion of their country. Anything that was the slightest bit left or radical or even new could be seen as communistic. ...read more.

back then, as it could affect your future, career and personal lifestyle. The black list did extensively affect people with influential power. This included writers, directors, actors and actresses who pressured film studios to produce movies promoting the positive ideas of the Communist Party. The perseverance upon normality and traditionalism was also portrayed metaphorically in numerous Sci-Fi movies (such as 'The Blob') of the time which illustrated racism, the hatred or fear of strangers or foreigners. Other forms of propaganda were used apart from sci-fi films, such as magazines and posters, some containing comments such as "How Communists Get That Way" and "Communists Are After Your Child." These were used effectively in America as the public was in panic, they relied on this propaganda to show them a way out of this disorder and stress. ...read more.

especially after the information leaked to the media and the discovery and conviction of spying for the Rosenberg's only heightened the worry and fear of the American public. The fall of McCarthyism happened from when the absurd idea of the witch hunt ventured into the military. Many officers were accused for no apparent reason which caused uproar. When the president at the time was also accused for communist sympathies he realised that McCarthy's reign must come to an end. This was done by information about McCarthy leaked to the media, journalists constantly portrayed him in a bad light, this helped to sway the publics irrational way of thinking. A good example of this would be a picture drawn by a cartoonist, showing McCarthy loosing his stand in politics and the unjustified idea of McCarthyism dying along side his influential character. ?? ?? ?? ?? ...read more.