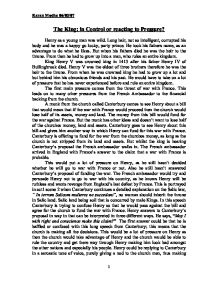 The King: in Control or reacting to Pressure?

The King: in Control or reacting to Pressure? Henry as a young man was wild. Long hair, not so intelligent, corrupted his body and he was a happy go lucky, party prince. He took his fathers name, as an advantage to do what he likes. But when his fathers died he was the heir to the throne. From then he had to grow up into a man, who rules an entire kingdom. King Henry V was crowned king in 1413 after his father Henry IV of Bullingbrook died. Henry V was the eldest of three brothers therefore he was the heir to the throne. From when he was crowned king he had to grow up a lot and but behind him his obnoxious friends and his past. He would have to take on a lot of pressure that he has never experienced before and rule an entire kingdom. The first main pressure comes from the threat of war with France. This leads on to many other pressures from the French Ambassador to the financial backing from the church. A monk from the church called Canterbury comes to see Henry about a bill that would mean that if the war with France would proceed then the church would lose half of its assets, money and land. ...read more.

This would be a religious gamble on Henry's behalf as he is using the church as an excuse if the war is unsuccessful and he comes home to a defeat. This means that Canterbury was at first trying to manipulate Henry but Henry twisted it and manipulates the church right back at them. After that Canterbury tries even harder to pressure rise by bringing up the last defeat for England by the French. He does this by saying, "Look back into your mighty ancestors." "...And your great-uncle's, Edward the Black Prince, who on the French ground played a tragedy." Here Canterbury is saying that take revenge for your uncle who didn't succeed and that if he comes back with a defeat the whole society would look even more down on him. As when he was a young party price he was wild using his place in society as an advantage. This made him look bad and with the company of his rude, shallow, low class friends he was portrayed as a fool and not living up to his name as a Prince of England. So he had to prove him self to the public that he wasn't a fool and could rule his country. ...read more.

The tennis balls could represent the Henry's old days as the party prince, swinging back to forth from duties as a prince to England. The gift from the Dauphin is also seen as a mocking gesture towards the Henry, as he used to be a party prince and now he is the King of England. Therefore saying he will be hit around and not know what will be coming next. The tennis balls could also represent the Scottish army invading England whilst the English invade France. Therefore the English will have to swing back to England to save England, and back aging to invade France. King Henry is also standing up for himself showing he is in control over all threats from France. So far Henry has had a lot to think about and a lot to deal with in this first act. He seems to have handled it well as he is new to the throne of England and is not used too many pressures from all different angles. In this act Henry has handled the pressures well and is in control over his country. But the war with France might be an upset in the coming scenes. As Henry's religious advisers may be a downfall to his achievements. Karan Modha 06/05/07 1 ...read more.