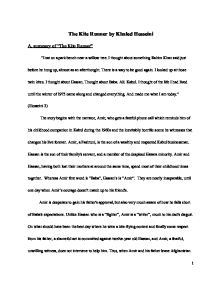 The Kite Runner by Khaled HosseiniA. summary of &quot;The Kite Runner&quot; &quot;I sat on a park bench near a willow tree. I thought about something Rahim Khan

The Kite Runner by Khaled Hosseini A. summary of "The Kite Runner" "I sat on a park bench near a willow tree. I thought about something Rahim Khan said just before he hung up, almost as an afterthought. There is a way to be good again. I looked up at those twin kites. I thought about Hassan. Thought about Baba. Ali. Kabul. I thought of the life I had lived until the winter of 1975 came along and changed everything. And made me what I am today." (Hosseini 2) The story begins with the narrator, Amir, who gets a fateful phone call which reminds him of his childhood companion in Kabul during the 1960s and the inevitably horrific scene he witnesses that changes his live forever. Amir, a Pashtuni, is the son of a wealthy and respected Kabul businessman. Hassan is the son of their family's servant, and a member of the despised Hazara minority. Amir and Hassan, having both lost their mothers at around the same time, spend most of their childhood times together. Whereas Amir first word is "Baba", Hassan's is "Amir". They are nearly inseparable, until one day when Amir's courage doesn't match up to his friend's. Amir is desperate to gain his father's approval, but also very much aware of how he falls short of Baba's expectations. Unlike Hassan who is a "fighter", Amir is a "writer", much to his dad's disgust. ...read more.

Among all of those, there are a couple of themes that I'd like to elaborate more. The first one is loyalty. There are two quotes that enhanced the meaning of loyalty and they are "For you, a thousand times over." (Hosseini 2) and "You can tell me, I'll stop doing it."(Hosseini 93) These to quotes were both said by Hassan. Both quotes show Hassan's ongoing loyalty, and true love for his friend Amir, and in both circumstance Hassan sacrifices for Amir. The latter of the quotes also shows Hassan's forgiveness, though Amir can't accept. Twice in his lifetime Amir is morally tested in his relationship with Hassan. The first time, a victim of his own arrogance, Amir fails his companion. Hiding behind the superiority of class, Amir chooses the path of least resistance. That first failure of betrayal scars Amir throughout his life, even in America, until he is offered another chance for redemption. With compassion, Hosseini lies the answer of Amir's personal dilemma in the forgiveness and kindness of human hearts. Another main theme that attributes the novels moving story is the social stigmas. In the novel, the setting is actually in a country which is in the process of being destroyed. It helps to show the inhumanity of a rigid class system (especially between the Pashtun and Hazara) and the horrific realities of war from its pre-Russian-invasion glory days through the terrible reign of the Taliban. ...read more.

Why this book? Despite all the plots about sacrifice, loyalty, etc, I find this book teaches you more about morality and humanity. Before the sept 11 attack, I basically didn't know anything about the Middle East condition. Right after the attack, I became aware of the Middle East area, but not in a positive way. Afterwards, I started to realize the real situation that's happening there. But still, after reading the book, not real enough. The book does show the details about the war and the cruelty that follows and I am aware of that. But before reading I wasn't aware on how human can act so low in such situations. How people can easily loose their moral in a critical circumstances. This is the part in the novel that touches me. And while reading the book especially the last parts, I began to feel really grateful and thankful that I'm here, that I was born in a situation as I am right now, that I don't have to experience such cruel conditions. And IF I am in such condition, will I also behave with such low morality in order to protect my own being? It can be scary but I guess this book makes u to appreciate more of yourself and for the morality in the world/around you. On a brighter note, the book is an easy read. There is not much hidden meaning and basically very straightforward. And since its been published in 2003, its been on the top 10 bestseller fiction until now (Amazon.com and Chapters.ca). ...read more.