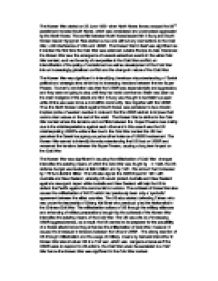 The Korean War and Superpower relations

The Korean War started on 25 June 1950 when North Korea forces crossed the 38th parallel and invaded South Korea, which was considered and unprovoked aggression by the North Korea. The conflict between North Korea leader Kim Il Sung and South Korean leader Syngman Ree started out as one without any connections to the Cold War, until interference of USA and USSR. The Korean War in itself was significant as it marked the first time the Cold War was extended outside Europe to Asia. Moreover, the Korean War saw the emergence of several watershed events in the wider Cold War context, such as the entry of new parties in the Cold War conflict, an intensification of the policy of containment as well as development of the Cold War into an increasingly globalized conflict and the change in nature of the Cold War. The Korean War was significant in intensifying American misunderstanding of Soviet political and strategic aims which led to increasing tensions between the two Super Powers. Truman's conviction was that the USSR was expansionistic and aggressive, and they were not going to stop until they had world dominance. Stalin was seen as the main instigator of the attack and Kim Il Sung was thought to be Stalin's puppet while China was seen to be a monolithic community bloc together with the USSR. ...read more.

The strong reaction of US through militarization and the usage of military means by General MacArthur in Korean War also involved US in a 'hot' war, which was dangerous because if the USSR were to respond to US actions, the Cold War would be escalated to a 'Hot' War hence the Korean War was significant in the Cold War context. The Korean War was significant in resulting in the emergence of several watershed events like the globalization of the Cold War where there were entries of new parties into the conflict and also the spreading of the conflict of Cold War into Asia. The Korean War started out as a localized conflict in between North Korea (NK) and South Korea (SK). It became part of the Cold War conflict after US interference because the US had assumed USSR was behind the spark of conflict between NK and SK. During US's attempts to defend SK against NK, MacArthur had led the US troops across the 38th parallel and thereby coming close to the Chinese border. The presence of US troops on the Chinese border was a threat to China's national security and Mao feared that the success of US's efforts in fighting NK will encourage China's political opponents such as Chiang Kai Shek to attempt a counter revolution and attack China Mainland with the support of US armed forces. ...read more.

But due to opposition from the French, West Germany could only join the European Army and NATO. Later on, US recognized West Germany as a full sovereign state and abolished all remaining occupation control. The rearmament of West Germany and membership in NATO represented a major defeat for Soviet policies towards Germany. The combination of US economic strength and technology with German manpower and military prowess was a strategic 'nightmare' for the Soviets, it was a major threat to their national security and the Soviets were worried about the consequences of a rearmed Germany. Hence USSR cemented its relationship with its Eastern European allies and formed the Warsaw pact, a mutual defense treaty between 8 communist countries in 1955. Hence the Korean War was significant in the addition of the military bloc between the Super Powers in the Cold War context, through the rearmament of West Germany, and hence contributed to an increase in tension between the 2 Super Powers. In conclusion, the Korean War was significant in the Cold War context as it saw the intensification of the Cold War and the addition of new participants in the conflict, together with a geographical scope to the Cold War. The Korean War eventually resulted in the increase in tensions and misunderstanding between the 2 Super Powers hence intensifying the Cold War. ...read more.