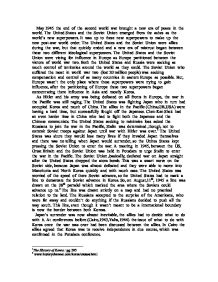 The Korean war and the conflict between North and South.

The South and it's military government were facing huge problems. The United States were finally looking for a way out in South Korea. South Korea beame crowded from many Koreans coming back from exile and also the many North Koreans crossing the border escaping the social reforms the social reforms in the North. Doctors, engineers, clergymen etc., came across the border and Kim-Il-Sung didn't stop this because he knew they were the sort of people that could be become a problem in the future against his regime. There was also serios food shortage, which led to strikes and riots in 1946 demanding increase in food rationing. The US military government in an attempt to restore order made another huge mistake, leading to more South Koreans joining the leftists in Korea, this was the reapointment of Japanese police officers to keep the peace. The Japanese were much hated in Korea because of the colonial treatment they received from Japan, this led to more violence and mistrust towards the police. The conflict between the left and right in Korea divided North and South Korea and influenced all of society. On, March, 1, 1947 clashes between the right and the left came to a boiling point in South Korea.9 It must be pointed out that the cold war between the United States and the ...read more.

Il-Sung was preparing for an attack. The skirmishes on the 38th parralel became increasingly tense in the summer of 1950. The North Koreans finally invaded the South on June,25th 1950 at the early hours of the morning. They picked this day because they knew that roughly 1/3 of the troops stationed along the parralel were on leave. More than 100,000 North Korean's invaded that day and teo days later Seoul, the capital city of South Korea, had been captured triggering the outbreak of the Korean war. The Korean war and the conflict between North and South is probably the best example in history of the impact the "Cold war" and the ideologies between the United States and the Soviet Union. The impact these two superpowers had on Korea is still seen today, even though the "cold war" has ended between the Soviet Union and US, there still is a "cold war" going on in Korea. 1The History of Korea : pg 205 2 www.historychannel.com/korea/causes.html 3 Oh, Korea under........., pg:13 4 www.ibiblio.org.... 5 Oh, Korea under..........,pg:13 6 Sandler, The Korean...., pg: 26 7 Lowe, The origins......., pg:22 8 www.mtholyoke.com.... 9 http://uk.geocities.com/tafk2/sneeze/korean_war.htm 10 www.historychannel.com/korean/causes.html 11 www.geocities.com/armvideo2002/.... 12 http://uk.geocities.com/tafk2/sneeze/korean_war.htm 13 http://uk.geocities.com/tafk2/sneeze/korean_war.htm 14 Sandler, The korean..., pg: 38 ...read more.