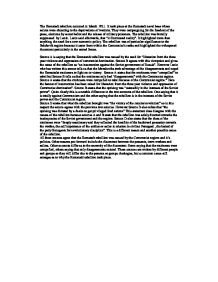 The Kronstadt rebellion occurred in March 1921.

The Kronstadt rebellion occurred in March 1921. It took place at the Kronstadt naval base where sailors were objecting to the deprivations of wartime. They were campaigning for the freedom of the press, elections by secret ballot and the release of military prisoners. The rebellion was brutally suppressed by Lenin. Lenin said afterwards, that "it illuminated reality". It highlighted more than anything, the need for a new economic policy. The rebellion was of particular significance to the Bolshevik regime because it came from within the Communist's ranks and highlighted the widespread discontent particularly in the armed forces. Source A is saying that the Kronstandt rebellion was caused by the need for "liberation from the three year violence and oppression of communist domination. ...read more.

Source A states that the mutineers were compelled to rebel because of the Communist regime." Here the banner of insurrection has been raised for liberation from the three year violence and oppression of Communist domination". Source B states that the uprising was "ostensibly in the interests of the Soviet power". Quire clearly this is a notable difference in the two accounts of the rebellion. One saying that it is totally against Communism and the other saying that the rebellion is in the interests of the Soviet power and the Communist regime. Source D states that what the rebellion brought was "the victory of the counter revolution" so in this respect the source agrees with the previous two sources. ...read more.

This is a different reason and another possible cause of the rebellion. All three sources agree that the Kronstadt rebellion was caused by the Communist regime and it's policies. Other reasons put forward include the discontent between the peasants, town workers and sailors. Other accounts differ as to the enormity of the discontent. Some saying that the mutineers were compelled, others saying that only disagreements existed. These sources are written by different people and groups so they will differ due to the persons or groups ideologies, but a common cause still emerges as to why the Kronstadt rebellion took place. ...read more.