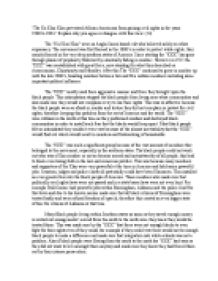 The Ku Klux Klan prevented African Americans from gaining civil rights in the years 1960 to 1964. Explain why you agree or disagree with this view. (24)

﻿?The Ku Klux Klan prevented African Americans from gaining civil rights in the years 1960 to 1964.? Explain why you agree or disagree with this view. (24) The ?Ku Klux Klan? were an Anglo-Saxon based cult who believed solely on white supremacy. The movement was first formed in the 1860?s in order to protect white rights; they mainly formed in the very deep southern states of America. Since starting the ?KKK? has gone through phases of popularity followed by essentially fading in number. However in 1915 the ?KKK? was reestablished with great force, now standing for what they described as Americanism, Christianity and Morality. After this The ?KKK? continued to grow in number up until the late 1960?s, boasting numbers between two and five million members including some important political influence. The ?KKK? mostly used there aggressive manner and force they brought upon the black people. This intimidation stopped the black people from living near white communities and also made sure they would not complain or try to use their rights. This was so affective because the black people were so afraid or murder and torture they did not complain or protest for civil rights, therefore keeping this problem from the rest of America and the world. ...read more.

These members also made sure that politically civil rights laws were not passed and in a state bases laws were not even kept. For example Bull Conner had powerful jobs within Birmingham, Alabama and the police chief for that town and due to his known racism made sure that all black citizens of Birmingham were treated badly and were refused freedom of speech, therefore this created an even bigger state of fear for citizens of Alabama at that time. Many Black people living within Southern states as soon as they saved enough money or sorted out arrangements? moved form the south to the north were they knew they would be treated fairer. This was made sure by the ?KKK? that there were not enough blacks to even fight for their rights even if they could, for example if they could vote there would not be enough black people to make a difference and made sure that integration into white schools was not a problem. Also if black people were fleeing from the south to the north the ?KKK? had won as they did not want to live amongst them anyway and made sure they knew they had forced them out by their intense persecution. ...read more.

Therefore in the long run the Klan just hindered themselves and made sure essentially that the black were treated better and given more rights. The influx of many civil rights activist groups such as the NAACP and the SCLC essentially cancelled out the ?KKK? as these groups thanks to the likes of Martin Luther King used clever modern tactics to counteract the Klan?s forces. These groups supported blacks in all areas from peaceful protest to help in the court rooms. The Klan?s unimaginative and predictable methods were no match for the power of things like the media and use of making sympathy for the black people in the south. The NAACP even helped black people get the vote in southern states so. Therefore there were civil rights sympathizes even in southern states. In conclusion, The ?Ku Klux Klan? was a successful movement and stopped many black people from succeeding in gaining Civil Rights mainly in the South. However, In 1964 The Civil Rights Act was passed and therefore could not succeed and never really stopped it, essentially they just succeeded in prolonging this act for a while. ...read more.