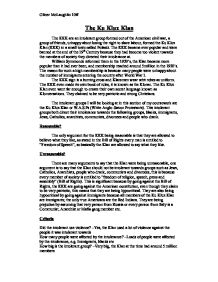 The Ku Klux Klan The KKK are an intolerant group formed out of the American civil war, a group of friends, unhappy about losing the right to slave labour, formed the Ku Klux Klan (KKK) in a small town called Polaski. The KKK became ever popular and were banned at the end of the 19th Century because they had become too violent towards the members of society they directed their intolerance at. William Symmonds reformed them in the 1920's, the Klan became more popular than it had ever been, and membership reached around 5million in the 1920's. The reason for such a high membership is because many people were unhappy about the number of immigrants entering the country after World War 1. ...read more.

Bill of Rights every man is entitled to "Freedom of Speech", so basically the Klan are allowed to say what they like. Unreasonable? There are many arguments to say that the Klan were being unreasonable, one argument is to say that the Klan should not be intolerant towards groups such as Jews, Catholics, Anarchists, people who drank, communists and divorcees, this is because every member of society is entitled to "freedom of religion, speech, press and assembly" (Bill of Rights). This is significant because by going against the Bill of Rights, the KKK are going against the American constitution, even though they claim to be very patriotic, this means that they are being hypocritical. ...read more.

-Yes, the Klan was very well organised, they organised events, rallies and even had their own hierarchy system Are they hypocritical? -Yes, because the KKK claims to be patriotic, but is always going against important parts of the American constitution, such has the Bill of rights and the Statue of Liberty this makes them hypocritical Is the intolerant prejudice? -Yes, because they make judgements about people from places like Russia i.e. saying that everyone who comes from Russian is a Communist even though most of the people from Russia were trying to escape Communism. This is a very serious group, there is a huge membership and the Klan is intolerant towards many groups. The Klan was known to use violence, be hypocritical with almost every argument it put forward and is very prejudice. Oliver McLaughlin 10ff ...read more.