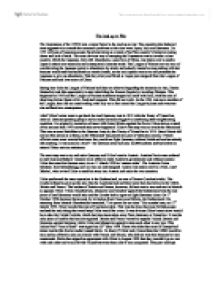 The lead up to War The Depression of the 1930's was a major factor in the lead up to war. The countries that behaved most aggressively towards the economic problems at the time were Japan, Italy and Germany. By 1931 millions of Japanese people faced starvation as a result of half the country's factories closing down and lack of trade. The most obvious way of escaping the Depression was to invade a close country, which the Japanese Army did. Manchuria, a province of China, was taken over to enable Japan to obtain raw materials and consequently increase trade. The League of Nations saw no way of overthrowing the Japanese rulers in Manchuria by attack and nobody wanted to stop trading with her because world trade had suffered too much already, so the only option was to try and persuade the Japanese to give up Manchuria. This they tried, and failed at. Japan just resigned from the League of Nations and took over more of China. Seeing how little the League of Nations had done or achieved regarding the situation in Asia, Benito Mussolini took this opportunity to start rebuilding the Roman Empire by invading Ethiopia. ...read more.

It was the only piece of land he had not yet regained. Britain and France vowed to support Poland, Greece and Romania against Germany while Hitler and Mussolini agreed to help each other in any war. This Italian-Nazi "Pact of Steel" was signed on 22nd May 1939. These two sides that most of Europe had taken worried the Soviet leader Joseph Stalin. He knew if Hitler took Poland then the USSR would be next and so offered to join an alliance with France and Britain, who did not trust him because he was communist. Stalin then signed an agreement with Hitler in August 1939 that they wouldn't go to war with each other and would divide Poland between them after it was conquered. This part was kept secret. Hitler had only signed the pact to prevent the Soviet Union stopping him take Poland and Stalin had only signed it so Germany wouldn't take over Russia. A week after the agreement was signed, Hitler invaded Poland on 1st September - "Operation Weiss". Then Stalin did, and between them they took over all of Poland. ...read more.

The French and British troops were completely surrounded and retreated to Dunkirk, on the French coast, where many were rescued by civilian and military ships and taken to England. Before the German invasion France had been politically divided with the left and right. The left wanted a communist state and the right were all for a Hitler takeover, such was their hatred for communism. In Paris, they were now equally divided as to whether to surrender to Hitler and protect their country or fight and risk major damage. The Prime Minister, Paul Reynaud, resigned rather than surrender and his deputy Marshal Henri Philippe P�tain took over and surrendered. He was a popular hero from WWI and signed an armistice with Germany on 22nd June 1940. The Germans then split France in two. The North was ruled directly by Nazis and the South became Vichy France, led by a Nazi sympathising government ruled by P�tain. Right wing French people supported this fully and those who didn't just hoped that the Germans would be beaten. The fall of France was the final act that secured the sides most countries would take throughout the war - Hitler ruled or was in alliance with most of Europe and would go on to try and take the rest of it. ...read more.