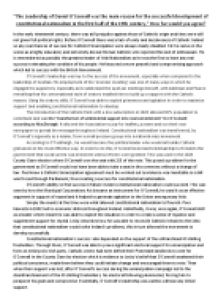 &quot;The Leadership of Daniel O'Connell was the main reason for the successful development of constitutional nationalism in the first half of the 19th century.&quot; How far would you agree?

﻿"The Leadership of Daniel O'Connell was the main reason for the successful development of constitutional nationalism in the first half of the 19th century." How far would you agree? In the early nineteenth century, there was still prejudice against those of Catholic origin and they were still not given full political rights. Before O'Connell there was a lack of unity and decisiveness of Catholic Ireland so any real chances of success for Catholic Emancipation were always clearly disabled. Yet he came on the scene as a highly educated, and extremely devout Roman Catholic who rejected this lack of enthusiasm. He is remembered as possibly the greatest leader of Irish Nationalism as he was the first to have any real success in elevating the condition of his people. He favoured a more peaceful and compromising approach which led to success with the British Government. O?Connell?s leadership was key to the success of the movement, especially when compared to the leadership of Grattan. His employment of the ?monster meeting? was one of many ways in which he engaged his supporters, especially as he addressed the open air meetings himself, with Adelman and Pearce remarking that his conversational style of oratory enabled him to build up a rapport with the Catholic masses. ...read more.

Simply the events at the time were what allowed constitutional nationalism to flourish. Poor harvests in 1842 led to economic distress throughout Ireland. Admittedly, it was, once again, O?Connell skill as a leader which meant he was able to exploit the situation in order to create a sense of injustice and supplement support for repeal. Lecky describes how he was able to reconcile Catholic Ireland to the idea that constitutional nationalism would solve Ireland's problems, this in turn allowed the movement to develop successfully. Constitutional nationalism's success also depended on the support of the enfranchised 40 shilling freeholders. Through them, O?Connell was able to prove significant electoral support for emancipation and form an embryonic Irish party. Catholic voters had even defied their Protestant landlords to vote for O'Connell in the County Clare by-election which is evidence to Lecky's belief that O'Connell awakened their political conscience, made them believe they could initiate change and encouraged them to vote. Then when their support was lost, after O?Connell?s success during the emancipation campaign led to the disenfranchisement of the 40 shilling freeholders, his electoral following plummeted, forcing him to postpone his goals and compromise. ...read more.

The period between the Act of Union and 1820 saw a lack of Catholic political leadership so when he filled that void, he gave hope and constitutional nationalism thrived. The historian Lecky reinforces this idea by claiming that O'Connell did more than anyone else did for the development of Irish nationalism. The fact that the movement nosedived after his death is testimony to his importance. In O?Connell, the movement found the leader it wanted, and the leader it had never had. His skill in oratory was, while creating rapport with the Catholic masses, to tacitly threaten the British Government with open rebellion. A dangerous but effective policy of brinksmanship won him support among urban and rural Catholics alike. Yet O'Connell's leadership skills would not have been enough without the support of the clergy. The political situation in Britain also had a big influence on the movement's development, when the government was strong it could limit reform; it had to resort to compromise when weaker. Nonetheless, it can be argued that they only achieved as much as the British government wanted them to achieve. So although the leadership of O'Connell was the main reason for constitutional nationalism's success in the mid 19th century, it wasn't the only one. ...read more.