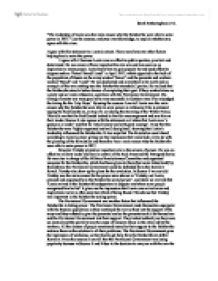 &quot;The leadership of Lenin was the main reason why the Bolsheviks were able to seize power in 1917.&quot; Use the sources, and your own knowledge, to explain whether you agree with this view.

"The leadership of Lenin was the main reason why the Bolsheviks were able to seize power in 1917." Use the sources, and your own knowledge, to explain whether you agree with this view. I agree with this statement to a certain extent. There were however other factors helping him to seize the power. I agree with it because Lenin was an effective public speaker, practical and determined. He was aware of how important his role was and was seen as an inspiration to many people. Lenin knew how to gain popularity and used effective slogans such as 'Peace! Bread! Land!' in April 1917, which appealed to the bulk of the population of Russia as the army wanted 'Peace!' and the peasants and workers wanted 'Bread!' and 'Land!' He was dedicated and committed in his work and an example of this was making sure the Bolsheviks attended all parties. He realised that the Bolsheviks stood a better chance of completing their goal if they worked alone as a party and so Lenin refused co-operation with the Provisional Government. ...read more.

He was an effective military leader and was in control of the Red Army and the Petrograd Soviet. He was also in charge of the Military Revolutionary Committee and organised weapons for the Bolsheviks, which had been given to them (but never taken back) by Kerensky so the Provisional Government could be defended from the Kornilov Revolt. Trotsky also drew up the plans for the revolution. In Source F we are told Trotsky was the main reason for the power seize shown in 'Trotsky, not Lenin, planned and organised how the Bolsheviks seized power', and when we are told that 'Lenin arrived at the Bolshevik headquarters in disguise and when some people recognised him he hid' it gives me the impression that Lenin was not as brave and inspirational as he is often seen but afraid of being found. This shows that Trotsky was important in the Bolsheviks seizing power. The Provisional Government was another factor that influenced the Bolsheviks in taking power. ...read more.

In Source C the Provisional Government's unpopularity is mentioned again as shown in, 'food and fuel remained in short supply. Now the people desperately wanted the war to end.' Therefore this shows that the unpopularity of the Provisional Government was an important factor influencing the Bolsheviks seizing power in 1917. The war helped the Bolsheviks seize power as everyone wanted it to end. The war had resulted in hunger in the cities as transport was disrupted and Lenin was offering 'Peace!' which basically said that the Bolsheviks would end the war if they were in power. The Provisional Government then lost support of the army, which was their only defence against attacks, and this ultimately led to their downfall thereby proving the war played an important role in the Bolsheviks seizing power. Although Lenin played a crucial role in the Bolsheviks seizing power he was not the main reason, because if the other factors were not present at the same time then I do not believe he would have been successful in getting power, and therefore I disagree with the statement. Sarah Fotheringham LVL ...read more.