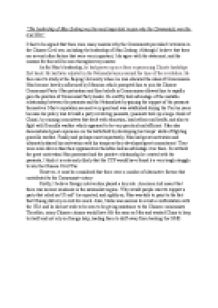 The leadership of Mao was the most important reason why the Communists won the Civil War. Discuss

﻿?The leadership of Mao Zedong was the most important reason why the Communists won the civil War? It has to be argued that there were many reasons why the Communists prevailed victorious in the Chinese Civil war, including the leadership of Mao Zedong. Although I believe that there are several other factors that were very important, I do agree with the statement, and the reasons for this will be seen throughout my answer. As for Mao?s leadership, he had grown up on a farm experiencing China's hardships first hand. ...read more.

Mao?s reputation seemed very good and was established during the Yan?an years because his policy was to build a party involving peasants, (peasants took up a large chunk of China), by running committees that dealt with education, land reform and health, and also to fight with Guerrilla warfare which appeared to be very practical and efficient. Mao also demonstrated great experience on the battlefield by developing his troops? skills of fighting guerrilla warfare. Finally and perhaps most importantly, Mao had great motivation and ultimately shared his motivation with his troops as they developed great commitment. ...read more.

American Aid meant that there was serious weakness in the nationalist regime. Why would people want to support a party that relied on US aid? As expected, and rightly so, Mao was able to point to the fact that Chiang did rely on Aid too much. Also, Stalin was anxious to avoid a confrontation with the USA and he did not wish to be seen to be giving assistance to the Chinese communists. Therefore, many Chinese citizens would have felt the same as Mao and wanted China to keep to itself and not rely on foreign help, leading them to drift away from backing the GMD. ...read more.