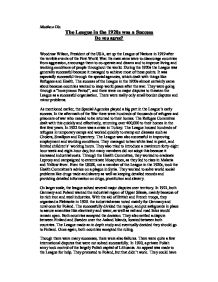 The League in the 1920s was a Success Do you agree?

Matthew Dix The League in the 1920s was a Success Do you agree? Woodrow Wilson, President of the USA, set up the League of Nations in 1919 after the terrible events of the First World War. Its main aims were to discourage countries from aggression, encourage them to co-operate and disarm and to improve living and working conditions of people throughout the world. During the 1920s the League was generally successful because it managed to achieve most of these points. It was especially successful through the special agencies, which dealt with things like Refugees and Health. The success of the League in the 1920s almost certainly came about because countries wanted to keep world peace after the war. They were going through a "honeymoon Period", and there were no major disputes to threaten the League as a successful organisation. There were really only small border disputes and minor problems. ...read more.

They worked to solve world social problems like drugs trade and slavery as well as keeping detailed records and providing detailed information on drugs, prostitution and slavery. On larger scale, the league solved several major disputes over territory. In 1921, both Germany and Poland wanted the industrial region of Upper Silesia, mainly because of its rich iron and steel industries. With the aid of British and French troops, they organised a Plebiscite in 1920. the industrial areas voted mainly for Germany and rural ones for Poland. The successfully divided the region, and put safeguards in place to assure amenities like electricity and water, as well as rail and road links would remain open. Both countries accepted the decision. They also settled a dispute between Finland and Sweden over the Aaland Islands, located between both countries. The League made an in depth study and eventually decided they should go to Finland. ...read more.

The Greeks had to apologise and pay compensation directly to Italy. Once again, the power of the League was undermined, and they had not been overly successful in solving the incident. Greece were once again involved in 1925, when they invaded Bulgaria after some troops were killed on the border. Bulgaria called for help, but also readied its army. They obviously were not certain the League could help. The League condemned the Greeks, and made them pull out. Greece complained that it was one rule for the larger states, like Italy, and another for smaller ones, such as themselves. There were successes in some areas and not in others, as the undermining of the League's power detracts form the positive achievements. The Special Agencies, and the extent to which the league improved life for normal people stand out, however, as points that show the League was, generally, successful in the 1920s. This success changed in the 1930s, but at this time the League would have looked to be doing a good job and achieving many successes. ...read more.