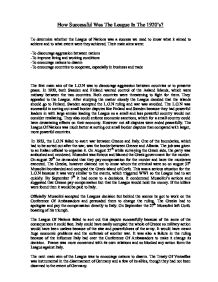 The league of nations - How successful was The League in the 1920's?

How Successful Was The League In The 1920's? To determine whether the League of Nations was a success we need to know what it aimed to achieve and to what extent were they achieved. Their main aims were: -To discourage aggression between nations -To improve living and working conditions -To encourage nations to disarm -To encourage countries to cooperate, especially in business and trade The first main aim of the L.O.N was to discourage aggression between countries or to preserve peace. In 1920, both Sweden and Finland wanted control of the Aaland Islands, which were midway between the two countries. Both countries were threatening to fight for them. They appealed to the League. After studying the matter closely the League decided that the islands should go to Finland. Sweden accepted the L.O.N ruling and war was avoided. The L.O.N was successful in sorting out small border disputes like Finland and Sweden because they had powerful leaders in with large armies leading the League so a small and less powerful country would not consider retaliating. They also could enforce economic sanctions, which for a small country could have devastating effects on their economy. However not all disputes were ended peacefully. The League Of Nations was much better at sorting out small border disputes than compared with larger, more powerful countries. In 1923, the L.O.N failed to avert war between Greece and Italy. ...read more.

The only major power missing was the Soviet Union. The Kellog-Briand Pact was agreed in 1928 and signed by 65 nations. Its terms were: - The parties should condemn war only as a means of solving international disputes and reject it as an instrument of policy - The settlement or solution of all disputes shall only be sought by peaceful means. There were a few problems with the Kellog-Briand Pact and the Locarno agreements. In the Kellog-Briand Pact, there was nothing to say what would happen if a state broke the terms in the Kellog-Briand Pact nor did it help the L.O.N with disarmament. The states all agreed that they would keep their armies for 'self defence' The Locarno agreements raised a problem with Poland and Czechoslovakia. They felt that if Germany had agreed to accept her borders in the west then she could change the borders in the east. The L.O.N was set up immediately after the war so many countries still felt unprotected and raw from the effects of the war. Many countries, even those who were members of the League were more concerned with their own affairs than with international ones. This was because many countries were still rebuilding their economies and repairing damage. Also many countries wanted to be armed to defend themselves if another war should occur. The Locarno Treaties and the Kellog-Briand Pact offered an easy way out of disarmament and seemed to solve its problems. ...read more.

With more money available, they were able to rebuild the industry and increase employment. This increased international trade and therefore led to an increase in profit. Europe was then able to pay the money back to America. Rebuilding trading relationships between countries relived the tension and when countries were trading with each other they were less likely to go to war. In conclusion, the League Of Nations was both a success and a failure. The League was limited in what it could do to avert war. They could use economic sanctions, moral condemnation and fines. Imposing economic sanctions and fines on a smaller country would have a greater effect because they hadn't the resources to resist them or cope with them but on a larger country such as Italy, these would have needed military support to back them up. The League did not have its own army and so would have had to rely on member's armies to provide this military back up. It would have been very unlikely that any nation would be willing give their army to fight. The League was a definite success in its second aim, to improve living and working conditions. It almost eradicated some major diseases and gave valuable advice to countries on health issues. It made some great successes in abolishing slavery and the illegal drug trade and helped many people to return to their countries. They achieved this because it was in the interests of all of Europe to rebuild and repair their countries and it did not create any threat or problems. ...read more.