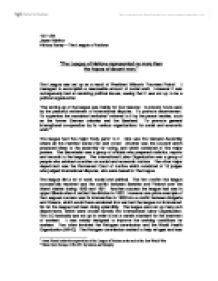 16/11/04 Jayant Mathur History Essay - The League of Nations "The League of Nations represented no more than the hopes of decent men." The League was set up as a result of President Wilson's 'Fourteen Points'. It managed to accomplish a reasonable amount of social work. However it was outrageously bad at resolving political issues, seeing that it was set up to be a political organization. 'The setting up of the league was mainly for four reasons: to prevent future wars by the peaceful settlement of international disputes. To promote disarmament. To supervise the mandated territories1 referred to it by the peace treaties, such as the former German colonies and the Saarland. To promote general international co-operation by its various organizations for social and economic work.'2 The league had five major 'body parts' to it. One was the General Assembly where all the member states met and voted. Another was the Council which proposed ideas to the assembly for voting, and which consisted of five major powers. The Secretariat was a group of officials who prepared statistics, reports and records to the league. The International Labor Organization was a group of people who advised countries on social and economic matters. The other major department was the Permanent Court of Justice which consisted of 15 judges who judged international disputes, who were based in The Hague. The league did a lot of work, social and political. ...read more.

The league was powerless to do anything. Firstly the league did not have an army so no offensive action could be taken. Secondly who was going to pay for the league and its activities; nobody was willing to make any financial commitments to the league, therefore it had to be extremely careful with its funding. And thirdly would the leaders be aiming to resolve national interests or global interests; like the Italians and Japanese. Thus all the leaders saw that the Security Council, like Italy and Japan members were bypassing the League and continuing with their global interests. Since the league could not take a stand, and did not pose any real threat to the Italians or Japanese people started not taking the league seriously. The league did not have any political force behind it anymore, and its decline had already begun. "The real death of the league was in 1935. One day it was a powerful body imposing sanctions, the next day it was an empty sham, everyone scuttling from it as quickly as possible. Hitler Watched."4 Another reason why nobody paid anymore heed to the league was because the major powers in the world were not present, like America and the U.S.S.R. The league needed a kind of watchdog or headmaster to make sure all the nations behaved themselves, however the country to play this role was missing and consequently all the member states ...read more.

"The implications of the conquest of Abyssinia were not confined to East Africa. Although victory cemented Mussolini's personal prestige at home, Italy gained little or nothing from it in material terms. The damage done, meanwhile, to the prestige of Britain, France and the League of Nations was irreversible. The only winner in the whole sorry episode was Adolf Hitler."6 T.A. Morris is obviously speculating on Hitler's benefits from the Abyssinian crisis. Morris is correct in stating that Hitler was the only winner because he was. "After seeing what happened in Manchuria and then in Abyssinia, most people drew the conclusion that it was no longer much use placing their hopes in the league."7 This was evident as the membership in the league dramatically started to fall after the Abyssinian crisis. The fate of the league had now been sealed, with its failure in Manchuria and Abyssinia. This was mainly because it had not been prepared; did not have an army, the world powers were not present. The men who helped set the league up had the welfare of the world in mind; what they got was a political group which was destined for political demise. The league just did not have what it took to be a political world entity, thus it represented no more than the hopes of decent men. ...read more.