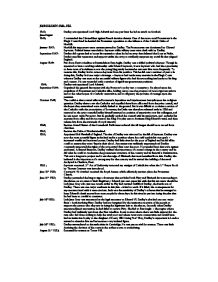 The Life of John Dudley.

1543;        Dudley was appointed Lord High Admiral and one year later he led an attack on Scotland.

1545;        Commanded the Channel fleet against French invasion threats. One of the more vocal Protestants in the King’s Council and he headed the Protestant opposition to the influence of the Catholic Duke of Norfolk.

January 1547;        Norfolk his supporters were outmanoeuvred by Dudley. The Protectorate was dominated by Edward Seymour. Political issues were left to Seymour while military ones were dealt with by Dudley.

September 1547:        Dudley did a great deal to boost his reputation when he led an army that defeated the Scots at Pinkie. Dudley used his reputation and support within the army to ruthlessly suppress any social ills that plagued England.

August 1549;        Put down Kett’s rebellion at Dussindale in East Anglia. Dudley was a skilled political schemer. Though he appeared to have a working relationship with Edward Seymour, it was Seymour who had the opportunity to have more of an influence over the young king purely because he was near him more frequently. To reverse this, Dudley had to remove Seymour from his position. This he did over a number of years. In doing this, Dudley had one major advantage – Seymour had made many enemies in the King’s Court whereas Dudley was seen as the successful military figure who had shown nothing but loyalty to his king and country. He was rewarded with a number of significant government positions.

September 1549;        Organized the general discontent with the Protector's policy into a conspiracy. He played upon the prejudices of Protestants and Catholics alike, holding out to one the prospect of more vigorous reform and to the other hopes of a Catholic restoration, and to all gentry the promise of revenge upon the peasants.

October 1549;        The coalition thus created effected Somerset's deposition and imprisonment but split upon the religious question. Dudley threw over the Catholics and expelled them from office and from the privy council, and the hopes they entertained were rudely dashed to the ground. But it was difficult to combine coercion of the Catholics with the proscription of Somerset; the Duke was therefore released early in 1550 and restored to the privy council; Dudley himself assumed no position of superiority over his colleagues, and he was never made Protector. But he gradually packed the council with his supporters, and excluded his enemies from office and from access to the King. His plan was to dominate King Edward's mind, and then release him from the trammels of royal minority

1550;         Became Grand Master of the Household. Parliament ordered that all images should be removed from churches.

1551;        Appointed Earl Marshall of England. The rise of Dudley was mirrored by the fall of Seymour. Dudley was now the most powerful figure in the land and in a position where he could exploit his two goals – increased wealth and increased power. Dudley had little time for the poor of England and he did all he could to ensure they were ‘kept in their place’. Any unrest was ruthlessly suppressed and Dudley constantly supported the rights of the propertied class over the poor. He repealed laws that were against enclosure. A shrewd financier, Dudley realised the importance of a sound coinage in the country and he did what he could to modernise the government structure of the country and its financial administration. This was a long-term project and it was the reign of Elizabeth that most benefited from this. Dudley also believed in the importance of a strong navy for the country and he started the building of the naval dockyard in Chatham, Kent.

1552 ;        Seymour executed. 2nd Act of Uniformity removed any vestiges of Catholicism when the 2nd Prayer Book by Thomas Cranmer was introduced.

June 21st 1553;        Dudley persuaded the king to sign a document that excluded both Mary and Elizabeth from succeeding to the throne on accounts of their illegitimacy. Edward put onto paper his wish that his successor should be Lady Jane Grey who just one month earlier in May had married Guildford Dudley, the fourth son of Dudley. There was one major weakness in this plan – it had to work. If it failed, the consequences for anyone associated with it were obvious. Such was the sensitivity of Dudley’s scheme that he managed to keep Edward’s death secret from most people for three days. In this time he put into being the plan that he had been so careful to construct.

July 10th1553;        Lady Jane Grey was announced as the legal successor to Edward VI. Dudley’s plan had one two major flaws – both involving Mary. Dudley had not bargained for the instinctive reaction of the people to support the person who they saw as being the legitimate heir to the throne. Secondly when Dudley announced Jane’s succession, he had failed to secure Mary. She fled to East Anglia – the region where Dudley had ruthlessly put down the Kett rebellion. It was an area where there was little support for the man who had done nothing to help the rural poor and where most were conservative and would have had an instinctive loyalty to the daughter of Henry VIII. Having ‘lost’ Mary, Dudley’s supporters in London started to abandon him and he became a very isolated figure.

July 20th 1553;        Dudley surrendered to the authorities in Cambridge. He was put on trial for treason. There was little doubting the decision of the court as the evidence was overwhelming.