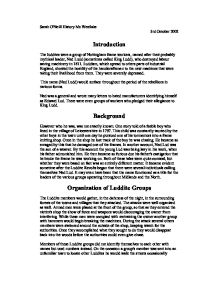 Sarah O'Neill History Ms Westlake 3rd October 2002 Introduction The luddites were a group of Nottingham frame workers, named after their probably mythical leader, Ned Ludd (sometimes called King Ludd), who destroyed labour saving machinery in 1811. Luddism, which spread to others parts of industrial England, showed the hostility of the handicraftsmen to the new machines that were taking their livelihood from them. They were severely depressed. This name (Ned Ludd) would surface throughout the period of the rebellions in various forms. Ned was a general and wrote many letters to hated manufacturers identifying himself as Edward Lud. There were even groups of workers who pledged their allegiance to King Ludd. Background However who he was, was not exactly known. ...read more.

It may even have been that the name functioned as a title for the leaders of the various groups operating throughout Midlands and the North. Organization of Luddite Groups The Luddite members would gather, in the darkness of the night, in the surrounding forests of the towns and villages that they attacked. The attacks were well organized as well. Armed men were placed at the front of the group, so that as they entered the victim's shop the show of force and weapons would discouraging the owner from interfering. While these men were occupied with restraining the owner another group with hammers would begin breaking the machines. During the attack several others members were stationed around the outside of the shop, keeping watch for the authorities. ...read more.

General Dyott's army along with the local militias began to chase the Luddites, but this did not deter the Luds. By 1812 Parliament became so distressed by the situation, especially when they looked at what had been occurring in Europe since the French Revolution, that they placed Lieutenant General Thomas Maitland in charge of a force of some 35,000 men to stop the Luddite attacks. Maitland followed his directive and by the following December the revolts were stopped. Those Luddites who were caught were tried and hanged. In the town of York, alone, 17 Luds were hanged, 7 were acquitted of their charges, and the remaining members were exiled to the colonies. They thought that if they smashed up all the machines then they would be reemployed to work but they never looked to the future and blinded themselves to progress. ...read more.