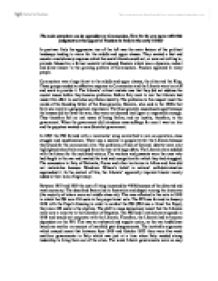 The main attraction was its opposition to Communism. How far do you agree with this judgment on the appeal of Fascism in Italy in the early 1920s?

The main attraction was its opposition to Communism. How far do you agree with this judgment on the appeal of Fascism in Italy in the early 1920s? In post-war Italy the aggressive rise of the left was the main feature of the political landscape leading to alarm for the middle and upper classes. They wanted a fast and counter-revolutionary response which the weak Liberals could not, or were not willing to, provide. Mussolini, a former socialist introduced Fascism which was a dynamic, radical and direct answer to the growing problem of Communism. Fascism appealed to many people. Communism was a huge threat to the middle and upper classes, the elites and the King. These groups needed an effective response to Communism and the Liberals were too stiff and weak to provide it. The Liberals' critical mistake was that they did not address the crucial issues before they became problems. Before Italy went to war the Liberals had made little effort to centralise any Italian identity. The problems in this respect recall the words of the founding father of the Risorgimento, Mazzini, who said in the 1860s that Italy was merely a geographical expression. The Risorgimento caused such upset because the masses did not have the vote; they were not deemed intelligent or responsible enough. ...read more.

The middle classes had a right to be concerned because in 1921 Antonio Gramsci founded the Italian Communist Party and was pro-revolution. Communism was a threat. The Bienno Rosso alarmed the middle classes and there was now large scale support for a counter-revolutionary force which would fill the gap left by the Liberal regime. The Liberals within their weak coalition governments could not even control general strikes. The Liberals had stayed aloof from the industrial conflicts for fear of offending the left, but this had been perceived as appeasement by the middle classes particularly as security of tenure had been granted to those who had illegally seized land, and Trade Unions had been given more power. It was this counter-revolutionary reaction which was to give Fascism its mass support. Fascism had not always been a strong right wing party. It began as a movement of the left which represented unity. Fascism was not a new concept. Various groups since the nineteenth century described themselves as Fascists, regardless of the political complexion of the group. However, in 1919 Mussolini re-branded Fascism as his own right wing movement. This was because of his hunger for power. In the election of November 1919 Mussolini's radical left wing party, Fasci di Combattimento, only received 5000 out of 270,000 votes which yielded not one seat. ...read more.

It also pleased the real fascists and there was now a chance of a real dictatorship. The Elites brought Mussolini into power because they had no other alternative. To boot, Mussolini got away with the major political scandal in which Matteotti (leader of the PSU and critic of the Fascists) was brutally murdered. In June later that year the opposition walked out of the Chamber in protest as the Aventine Succession. The King ignored this and refused to read the Rossi Memorandum which publicly declared that Mussolini was implicated in the murder. This was because he, the King, did not want to accept the truth. Circumstances would seem to point to the fact that Mussolini had been involved in the murder, and the King knew this. However, the King's reluctant inertia seemed inevitable; he had brought Mussolini to power in the first place and the latter's March on Rome succeeded because the King realised that Mussolini was the only effective bulwark to the left wing. Mussolini proved this in August 1922 when there was a General Strike. The weak coalition government did not crush it. Mussolini did. Fascism relied on the weakness of its opposition but it also aimed at something better: a unified and centralized Italy. Mussolini came to power because the elites were scared of the future with mass democracy. Mussolini's Acerbo Law secured his place as Italy's Prime Minister and dictator. ...read more.