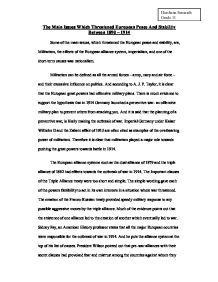 The main issues which threatened european peace and stability between 1890 - 1914.

The Main Issues Which Threatened European Peace And Stability Between 1890 - 1914 Some of the main issues, which threatened the European peace and stability, are, Militarism, the effects of the European alliance system, imperialism, and one of the short-term causes was nationalism. Militarism can be defined as all the armed forces - army, navy and air force - and their excessive influence on politics. And according to A. J. P. Taylor, it is clear that the European great powers had offensive military plans. There is much evidence to support the hypothesis that in 1914 Germany launched a preventive war- an offensive military plan to prevent others from attacking you. And it is said that the planning of a preventive war, is likely making the outbreak of war. ...read more.

Sidney Fay, an American History professor states that all the major European countries were responsible for the outbreak of war in 1914. And he puts the alliance system at the top of his list of causes. President Wilson pointed out that pre-war alliances with their secret clauses had provoked fear and mistrust among the countries against whom they were aimed and eventually led to war. But Historian A.J.P. Taylor did not see the alliance system as the cause of war. And according to him the cause of war was the breakdown of the balance of power. After considering the above-mentioned facts, it can be stated that the effects of the alliance systems influenced the outbreak of war in 1914. Imperialism, which can be interpreted to mean formal annexation and political rule, also had its effects towards the outbreak of war in 1914. ...read more.

And they were all waiting for a chance to gain control. They got the chance in 1908 when a group known as the 'Young Turks' caused chaos in Turkey. Emperor Franz Joseph of Austria-Hungary took over Serbs and made an enemy of Serbia. The Balkan countries formed the Balkan League and attacked Turkey. But very soon the four kings of the Balkan league made wars on each other. To make matters worse the Sarajevo murders led to another war in the Balkans. And that war led to final showdown in 1914. Therefore we see that nationalism in the Balkans was a direct link to the outbreak of war in 1914. In conclusion, it can be stated that militarism, the effects of the alliance systems, imperialism and nationalism were some of the main issues which threatened the European peace and stability between 1890 - 1914. ...read more.