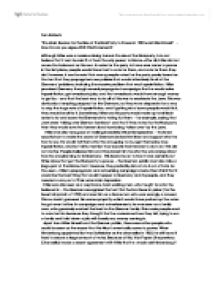 The Main Reason for the Rise of the Nazi Party to Power in 1933 was Hitler Himself How Far do you Agree With This Statement?

Tom Roberts 'The Main Reason for the Rise of the Nazi Party to Power in 1933 was Hitler Himself' - How Far do you Agree With This Statement? Although Hitler was a massive driving force in the rise of the Nazi party, I do not believe that it can be said that he is the only person to blame. After all, Hitler did not cause the holocaust on his own. In order for the party to have ever come to power in the first place, people would have had to vote for them, and vote for them they did. However, it can be said that many people voted for the party purely based on the fact that they propagated new policies that would effectively fix all of the Germans' problems, including the massive problem that was hyperinflation. Hitler promised Germany through several propagated campaigns that he would solve hyperinflation, get everybody jobs, and that everybody would have enough money to get by - and that the best way to do all of this was to eradicate the Jews. This was obviously a tempting prospect for the Germans, as they were desperate for a way to stop the huge rate of hyperinflation, and if getting rid of some people would fix it, they would be all for it. ...read more.

In campaigns and advertisements, he was seen as a family man, who genuinely wanted the best for the German family. This made people want to vote for him because they thought that he understood how they felt, trying to run a family and hold down a job with barely any money coming in. Apart from Hitler himself and the German public, there were other people who could be seen as the reason that the Nazi's eventually came to power. When Hindenburg appointed Kurt von Schleicher as the chancellor in 1932, he still found it hard to secure a large amount of votes. Because of this, Von Papen (the previous Chancellor) made a secret agreement with Hitler that he would ask Hindenburg if Hitler could be chancellor on the condition that he (von Papen) would be given a place in the government along with his supporters. However, in January 1933 Hindenburg refused Von Papen's proposal at first. Then, only a week later, Von Schleicher resigned as chancellor because he did not have enough support in the Reichstag. Hindenburg then wanted to re-appoint von Papen, but could not because he did not have enough support from the public, and appointing him as chancellor would cause a movement against Hindenburg. ...read more.

Over the five years from 1928 to 1933, the Nazi party grew from just 12 seats in the government to in 1928 to 288 in 1933. This was the biggest increase of votes in the whole of German history, and this is largely due to the fact that over these five years, the Germans simply didn't know what to do about the troubles they faced, and as everybody else seemed to be voting for the Nazi party - word of mouth no doubt helped them to grow - they would vote for them too. This would have caused a snowballing effect with the votes, as word got out and everybody decided to vote for them. Therefore in conclusion, I think that many factors and people contributed to the Nazi party's rise, and that although Hitler was the driving force behind it, he was not the main reason they came to power. No matter how clever he was or how many influential speeches he made, if the Germans had not been in such a depressed state, they may never have chose to vote for them, and the holocaust may never have happened. ...read more.