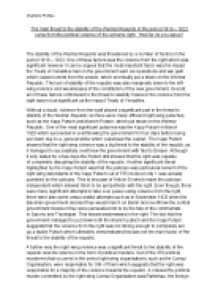 The main threat to the stability of the Weimar Republic in the period 1919 1923 came from the political violence of the extreme right. How far do you agree?

The impact of the war blame combined with the territorial provisions and military restrictions lead to a hatred of the republic from both the right and left which eventually threatened the stability of the republic as it caused significant opposition to the establishment. The war guilt clause was more significant than the violence from the right because without the Treaty of Versailles there would have been less dissatisfaction from the right. It can be argued that the reparations from the Treaty of Versailles were a significant threat to the Weimar Republic as they caused social unrest in Germany which caused people to turn to extremist parties. The cost of reparations and war debt drastically raised the deficit. To deal with this the government printed more money which meant that by 1923 the Reichmark wad practically worthless. This meant the everyday commodities such as bread was worth millions which was not good for workers as their wages were not raised. This left the people poverty stricken and frustrated with the government, which led the people to support extreme groups which weakened the republic as it lost the support of the people so couldn?t with stand the threats posed from the left and right extremes. Printing more money didn?t make the paying of reparations any easier as they were to be paid in a fixed currency such as the US Dollar. ...read more.

Other threats from the left arose in Bavaria in 1919 when a Bavarian Soviet Republic was set up and lead by Levine who introduced reforms and raised a Red Army. This shows that the left was a serious threat to the republic as managed to overthrow the Bavarian government for a month before being crushed by30,000 Freikorps; it also demonstrates that violence from the left was not just confined to the capital. Even though there were serious attempts to seize power by the left, they were all easily but down by the Freikorps and the agreement between Ebert and General Groener 1918. The left didn?t play a huge part in the political violence in the period. Out of the 376 political assassinations the left were only responsible for 22 which is 6%. These figures show the left were not a huge threat to the republic and clearly not as significant as the violence from the right or the effects of the Treaty of Versailles. It can be seen that the reparations and war guilt from the Treaty of Versailles were the most significant threats to the republic as it caused republic to lose the support of the people. However the violence from the right cannot be underestimated as it was an overpowering force that was supported by the judiciary or the army. Violence from the left and the weakness of the constitution also can be proved important dangers to the republic however alone they wouldn?t have had the ability to pose as a major threat to the rebublic. ...read more.