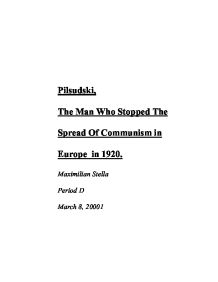 The Man Who Stopped The Spread Of Communism in Europe in 1920.

Pilsudski, The Man Who Stopped The Spread Of Communism in Europe in 1920. Maximilian Stella Period D March 8, 20001 (Stella, 1) Marshall Jozef Pilsudski, was one of the most important persons in preventing the spread of Communism throughout Europe after World War I. His biggest success was the victory over the Bolshevik forces in 1920. The victory over the Bolsheviks had arose after several important turning points in Polish history. One of them was the meeting in Versaille where the world- powers met after World War I to discuss several important issues concerning the new borders in Europe. Among those countries were France, England and the U.S. They decided to recreate Poland as a country. Poland had got its own government and land after 123 years of foreign rule by Austria, Prussia and Russia, which finally had to give up after their partitions of Poland in the 1790's. In the developing country great personalities played an important role. Among them there was one of the greatest Poles that ever lived -Marshall Jozef Klemens Pilsudski. ...read more.

Britain and France closely followed Pilsudski's actions and were very nervous about the Bolshevik offense. Especially, because the western countries were weakened after the war and were very afraid of the threat of spreading of communism from the east to the west. The feared moment took place on June 5th when Soviet broke the Polish defense line near Sulechow. The British minister Horace Rumbold blamed Pilsudski for not taking help from the allied forces and that he tried to act as a hero and show the world what a great leader he was. Pilsudski's opinion was though that the generals of the allied forces wouldn't be able to communicate with the Polish soldiers because of the different languages. (Stella, 3) He believed that it was time for Poland to prove that it is a strong country again, ready to manage their problems by themselves. Maurice Henkey, a British politician was sent to Warsaw with an order to convince the Polish commanders of the profits with having a British or a French Head-of-the-army. The Poles objected. ...read more.

For example, "Le Figaro'' from August 19 writes that French tactics had been used in the battle by General Weygand. Another paper, "L'Echo de Paris'' from August 21 informs about a Polish victory but doesn't mention Pilsudski at all. Only one western paper informed the world about the Polish victory and Marshall Pilsudski's actions.It was ''Le Populaire'' from August 21. Even the American newspapers didn't write the whole truth, or they were simply wrongly informed. "The New York Times'' from August 1 said that one-thousand of French generals were sent to Poland through Gdansk to modernize the Polish army. Ironically, Gdansk was a free city in that time and didn't allow any ships into their harbor that had anything to do with war. (Koryn) It is sad to see how under appreciated Pilsudski and the Polish army was. The world didn't now about the importance of the battle and who really deserved the appreciation. Today, historian's say that Pilsudski was one of the greatest generals ever lived and that he played one of the most important roles in preventing the Red Army to continue their attempt to conquer Europe. ...read more.