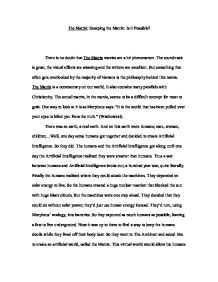 The Matrix: Escaping the Matrix: Is it Possible? There is no doubt that The Matrix movies are a hit phenomenon. The soundtrack is great, the visual effects are amazing and the writers are excellent. But something that often gets overlooked by the majority of viewers is the philosophy behind this movie. The Matrix is a commentary on our world. It also contains many parallels with Christianity. The actual matrix, in the movie, seems to be a difficult concept for most to grab. One way to look at it is as Morpheus says: "It is the world that has been pulled over your eyes to blind you from the truth." (Wachowski). There was an earth, a real earth. And on this earth were humans; men, women, children...Well, one day some humans got together and decided to create Artificial Intelligence. So they did. The humans and the Artificial Intelligence got along until one day the Artificial Intelligence realized they were smarter than humans. Thus a war between humans and Artificial Intelligence broke out; a hundred year war, quite literally. Finally the humans realized where they could attack the machines. ...read more.

In the movie, humans seem to be able to escape the Matrix. But the question is can they really escape the Matrix? "When the Matrix was first built, there was a man born inside who had the ability to change whatever he wanted, to remake the Matrix as he saw fit. It was he who freed the first of us, taught us the truth. As long as the Matrix exists the human race will never be free. After he died the Oracle prophesied his return and that his coming would hail the destruction of the Matrix and the war, bring freedom to our people." (Wachowski). Neo, also known as, Thomas A. Anderson, is the main character of The Matrix trilogy. Thomas' name means "twin" (Internet). And as his name suggests he has two lives. We are first introduced to Anderson as Neo, the computer hacker. Next we are shown Thomas A. Anderson; the suit wearing computer programmer sitting in his petit cubicle at MetaCortex, a software corporation. "One of these lives has a future and one of them does not" (Wachowski). ...read more.

They are in a prison for the mind; a place to keep slaves. "Like everyone else you were born into bondage, born into a prison that you cannot smell or taste or touch; a prison for your mind" (Wachowski). One of the first things that Neo asks when aboard the Nebuchadnezzar is "Why do my eyes hurt?" (Wachowski). To which Morpheus replies "You've never used them before" (Wachowski). Neo has finally opened his eyes to something new. It is also interesting to note at this point that while in the matrix the freed humans almost always wear sunglasses. This suggest the blindness of the people while in the matrix. While when in Zion they don't where sunglasses, suggesting that these people are not blind. When Neo supposedly woke up from the matrix he did not escape it. The matrix gives you a purpose Conclusion: Neo can no longer doubt the existence of the matrix. He saw both it and the real world. Someone still in the matrix can doubt the matrix because they have not seen the real world. They can't compare the two. They believe that they are in the real world. Neo and the other humans in Zion don't know what real is. ...read more.