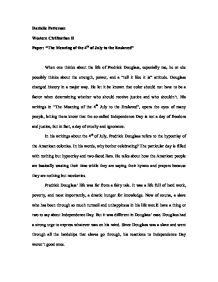 The Meaning of the 4th of July to the Enslaved

Danielle Patterson Western Civilization II Paper: "The Meaning of the 4th of July to the Enslaved" When one thinks about the life of Fredrick Douglass, especially me, he or she possibly thinks about the strength, power, and a "tell it like it is" attitude. Douglass changed history in a major way. He let it be known that color should not have to be a factor when determining whether who should receive justice and who shouldn't. His writings in "The Meaning of the 4th July to the Enslaved", opens the eyes of many people, letting them know that the so-called Independence Day is not a day of freedom and justice, but in fact, a day of cruelty and ignorance. In his writings about the 4th of July, Fredrick Douglass refers to the hypocrisy of the American colonies. In his words, why bother celebrating? ...read more.

how to read, there would be no keeping him. It would forever unfit him to be a slave. He would at once become unmanageable, and of no value to his master. As to himself, it could do him no good, but a great deal of harm. It would make him discontented and unhappy.' {Douglass, 78}. These statements greatly affected Douglass. He finally began to understand certain things, his eyes began to open to new things. As he put it, he "understood the pathway from slavery to freedom" {Douglass, 78}. Because of the words from his master, Douglass' hunger for knowledge and freedom grew stronger and stronger by the day. If one looks at the statistics of slavery in 19th century America, he or she will definitely be taken back. In 1850, there were 4 million slaves in the U.S. colonies out of 3 million people in the country. ...read more.

{Driving While Black} and, in current times, stopping and questioning Muslims and other people of Middle Eastern descent, make America somewhat hypocritical. Since America has drastically changed since the 19th century, the "American Dream" is somewhat of a reality. For me, the "American Dream" is defined as people, of any race, living in perfect harmony, despite the circumstances. Yes, since we have more laws today protecting minorities than back in slavery times, my definition of the "American Dream" is somewhat a reality. But, as always, this country can improve on this particular topic, as well as many others. In conclusion, Fredrick Douglass can definitely be put on a list of people who have changed America's history. His thirst for knowledge and dream of freedom opened the doors to great thoughts, extraordinary literature, and needed justice. Douglass' persistence and his focusing on important issues brought about the recognizing of the black race and its stance in American society. He made people realize that justice is not blood, sweat and tears, but life, liberty and the pursuit of happiness... For Everyone. ...read more.